Warning: count(): Parameter must be an array or an object that implements Countable in /home/rano365/public_html/wp-content/themes/yoo_nano2_wp/warp/systems/wordpress/helpers/system.php on line 61
 Rano360.com » Khairul Anuar flies to Russia 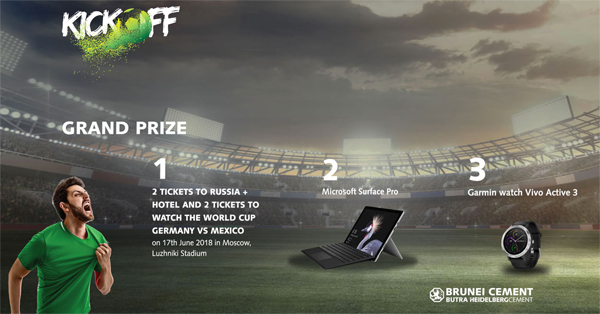 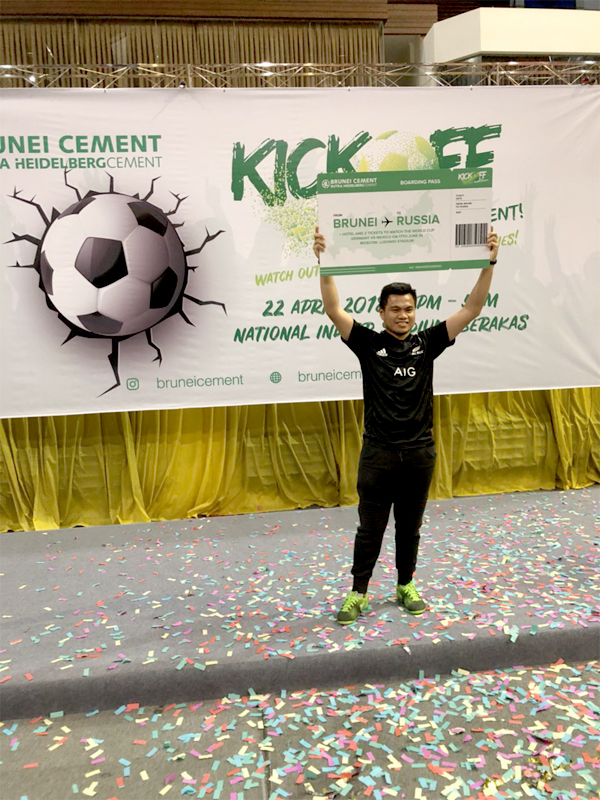 Out of all the 100 participants, Mohd Khairul Anuar emerged the champion of the ButraHeidelberg Cement (BHC) Sdn Bhd ‘Kick-Off with Brunei Cement’ campaign last Sunday at the Indoor Stadium.

He won the competition’s grand prize of a trip for two to Russia including hotel accommodation and tickets to watch the World Cup match between Germany and Mexico on June 17, 2018 at the Moscow Luzhniki Stadium.

It was a tie between Mohd Khairul Anuar and Md Zain in the “score and win” section. The score were tied with 1-1 and Md Zain had the opportunity to seal the finals by scoring one more point from three kicks. However, the scoreline remained at 1-1. The tie-breaker was then decided as Mohd Khairul successfully made 4 out of 5 attempts scoring 4 points whereas Md Zain only score 1 point. The other third finalist Hajah Siti Nurnajiah binti Haji Yahya failed to register a point in the “score and win” section.

The semi-finals was a much interesting affair as 7 contestants were vying for the top 3 spots in the finals and all they had to do is “Name the Flag” of the 20 listed countries participating in the Russia 2018. Hajah Siti Nurnajiah emerged the winner in the category, almost scoring a perfect score with 19 out of 20 marks. Both Mohd Khairul Anuar and Md Zain finished with 17 points.

The Kick Off With Brunei Cement competition was held in conjunction with the 2018 FIFA World Cup and it began early March 2018 to get the ball rolling. 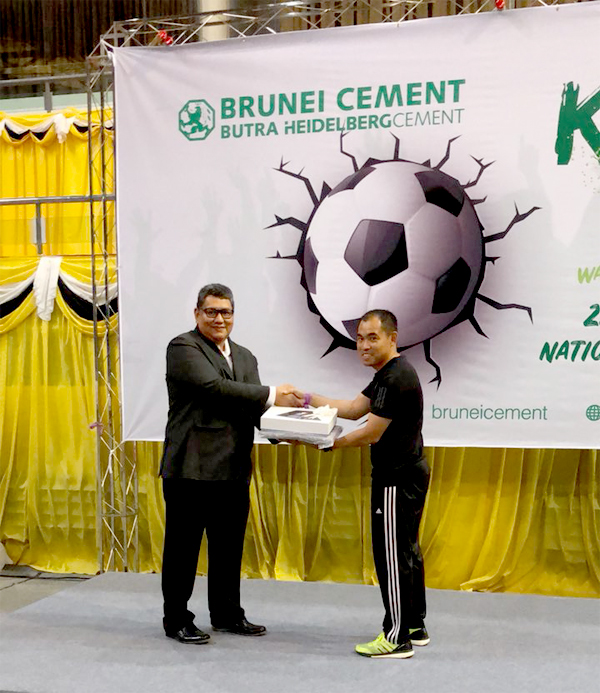 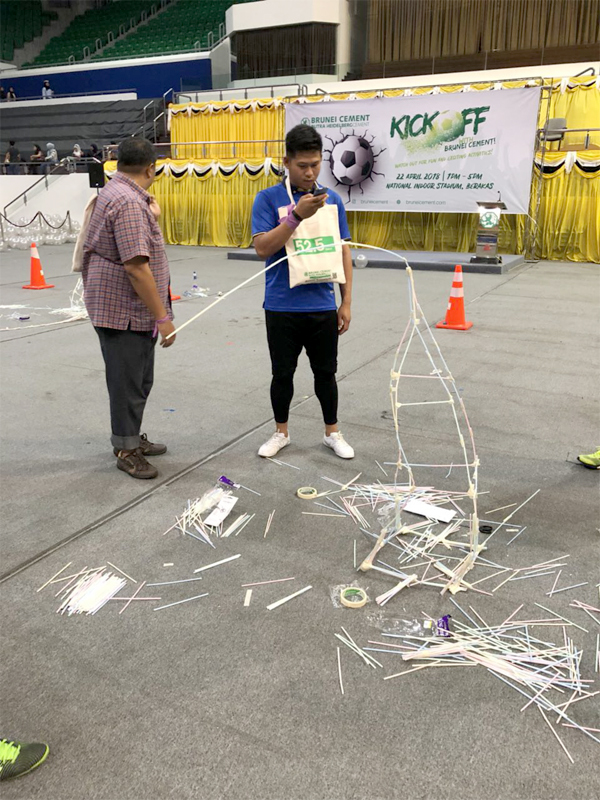 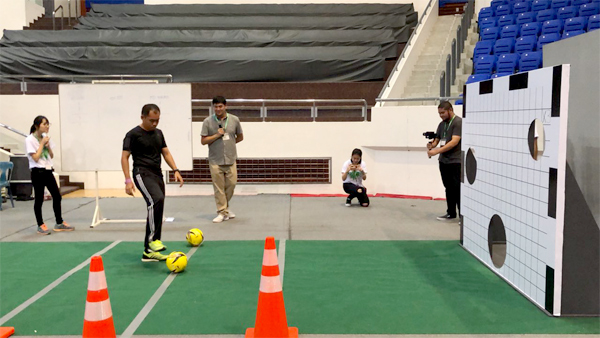 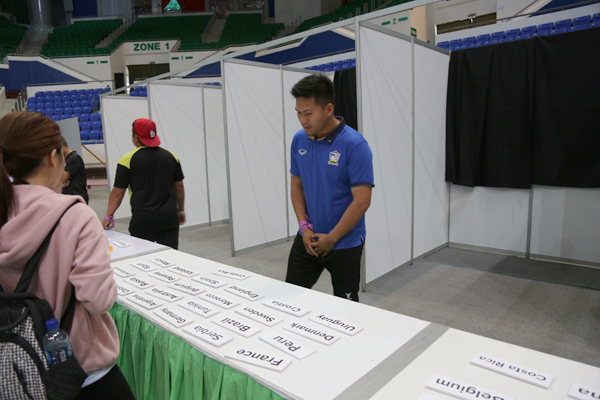 Name the Flag session was fun 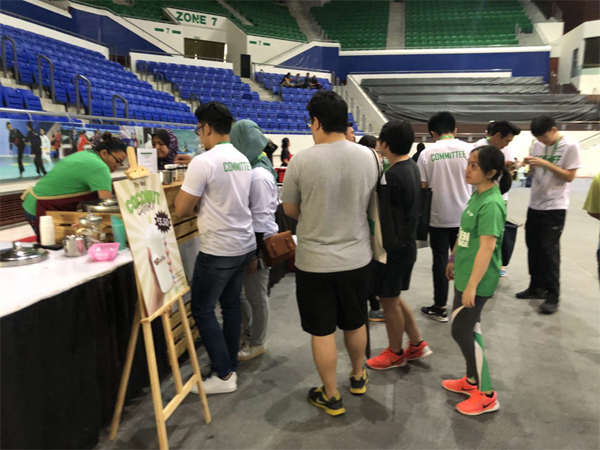 Some of the vendors participating during the event

For the past few weeks, BHC organised a series of activities as part of the Kick-Off with Brunei Cement competition, with pre-event activities being held in early March 2018, the ‘Stick and Win’ activity where participants had to attach the official ‘Kick-Off with Brunei Cement 2018’ sticker on a registered motor vehicle and be spotted in several locations as announced by the company on its Instagram account @bruneicement

The second pre-event activity was the ‘Snap and Win’, where several riddles each indicating a specific location were mentioned on @BruneiCement, where to win, participants had to guess and snap a photo of the location they think corresponds to each riddle.

The third pre-event activity was the ‘Follow and Win’ activity held during BandarKu Ceria and TutongKu Ceria. Participants were required to follow @BruneiCement, and those who managed to obtain a special “stressball” with the special logo were given a ticket to participate in the main event last Sunday.

All winners (100 of them) from the pre-event activities competed in a series of games, including the ‘Scavenger Hunt’, ‘Tallest Tower’, ‘Name the Flag’ and ‘Score and Win’.

Other activities for the contestants and their family and friends at the main event included a kids’ corner and a face painting session.
Also featuring at the event were a 100 cotton candy sticks giveaway, a popcorn and coconut ice cream stall, and sale of Chicken Joy meals from Jollibee. There was also an appearance by Jollibee mascot.