Warning: count(): Parameter must be an array or an object that implements Countable in /home/rano365/public_html/wp-content/themes/yoo_nano2_wp/warp/systems/wordpress/helpers/system.php on line 61
 Rano360.com » Hello Seoul. Part II 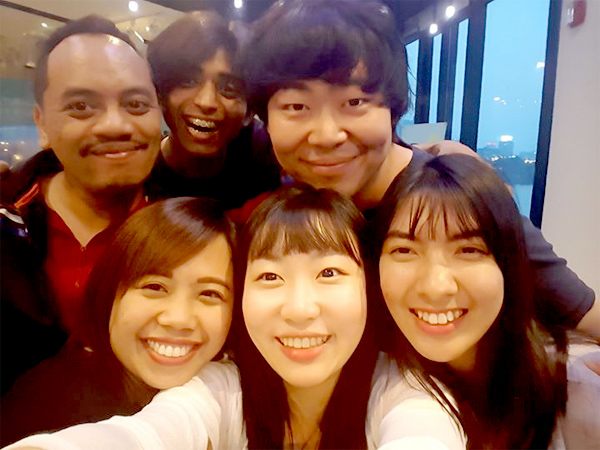 Friends I made during my 5 day trip in Seoul, Korea. Taken late June 2017. 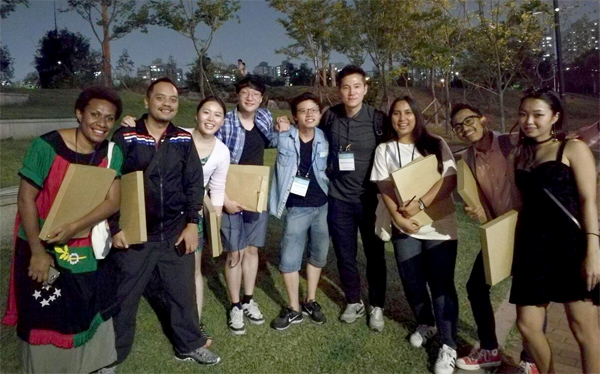 I’m still reminiscing my day in Seoul, Korea during my short visit for the Asian Cultural Young Leaders’ Camp 2017 (25th June to 30th June). It seemed like yesterday but it has been almost a month since that experience. I made the conscious choice to accept the offer even though it was during the first few days of Eid Mubarak celebration. My deepest gratitude to the Korean Embassy to Brunei and the Ministry of Foreign Affairs of Republic of Korea for giving me this opportunity in the first place.

The hospitality was top notch and MOFA (Korea) knew how to take care of all the representatives from Asia Pacific during their stay in Seoul, Korea. We bonded on the first night with the youth from different walks of life. From Japan to Australia to Mongolia to Afghanistan, you name it. It was an emotional farewell on the final dinner before we departed back to our own countries. This is my biggest highlight of the Asian Cultural Young Leaders’ Camp 2017 #ACYLC2017 #2017ACYLC – the diplomacy and friendship among different nationalities and cultures. This is a sign of world peace where all of us can get along and make a difference in the world. I just wish for longer days and freer time to further strengthen the bonds and friendship among my newly acquainted friends.

I previously shared my story on PyeongChang, the upcoming Winter Games in February 2018. Now let allow me to share my other interesting trips at Korea. First up was the visit to the Ojukheon House at Gangneung near PyeonChang, a few hours ride from Seoul. If you really keen to understand the culture of Korea, this is a must visit territory.

Ojukheon House. According to history, Ojukheon House was where Shin Saimdang (1504-1551) lived and where her son Yi I (penname Yulgok; scholar and politician of the Joseon Period) was born. It was built during the early Joseon Dynasty and remains one of the oldest wooden residential buildings in Korea. It was designated as Treasure No. 165 in 1963 and has been maintained by the descendants throughout the generations.The house is made of black bamboo trees and still holding up. The interesting fact is that Shin Saimdang is featured on the Korean Won 50,000 note and still is. Her contribution as a artist and poet back in the 16th century and she’s the only lady being featured on Korean currency. If you are heading for the Winter Olympics at PyeongChang, then do visit Ojukheon House.

Seongyojang House. Another place I found interesting was Seongyojang House which was built back in the 1750s. Now why this is a unique place is because it reminds me of Air BnB. Let me share you a bit of history. It was created in 1703 by Yi Naebeon, an 11th generation descendant of Prince Hyoryeondaegun, part of the Hyoryeong royal family during the Joseon Dynasty. The idea behind Seongyojang House was to promote happiness and joy among relatives living there. Now I was told that back then, the owner of the residence would welcome guests and visitors to stay and they won’t accept any form of monetary in exchange. The guests were also well fed by the host and in return, they would shower the host with gifts instead as a sign of gratitude.

I’m still surprised that the Seongyojang House is very well maintained after 300 years and has past 10 generations. The structures are still intact and well preserved and it was even selected by Korean Broadcasting System as the top 10 well preserved original dwellings in Korea. A must visit destination if you are around PyeongChang area. I’m glad that such historical places do still exist and well maintained. 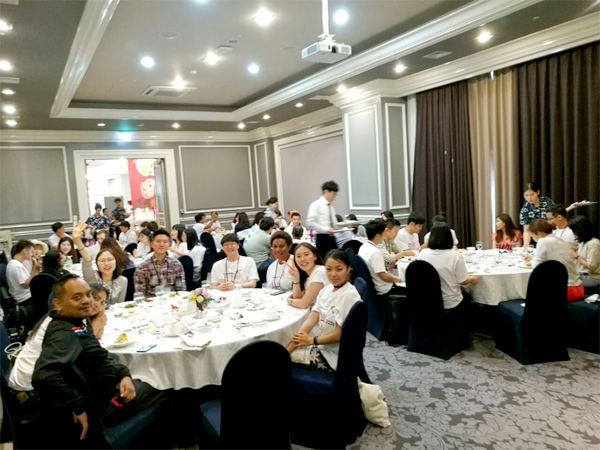 Lunch around PyeongChang while being briefed on the Winter Olympics 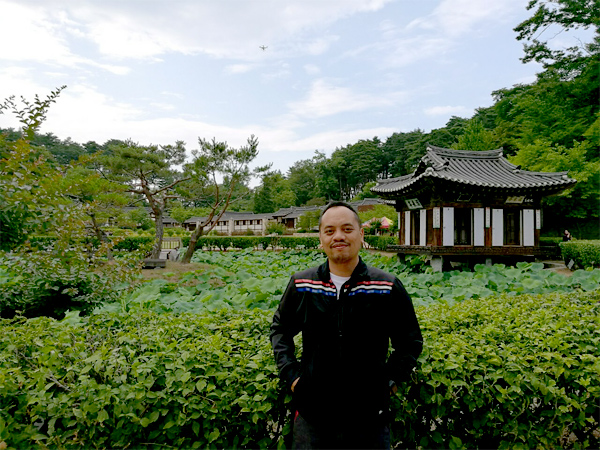 The view outside Seongyojang House. An interesting and historical place to visit.

Ok, here goes my version – WWWOWWWW!!!! It’s like a city of its own and I could see associates of Samsung just cycling around to get to the other building. It’s also very heavily guarded so no one can simply just enter the Suwon Digital City. I seriously don’t mind working in this environment and it does feel quite futuristic (like in the movies). Too bad our group only tasted 5% of the Suwon Digital City. I wanted more but I guess there are restricted area.

In the museum, you will get to learn of the history of Samsung and also other inventions by inventors and also recognizing other brands that made an impact on our daily lives through time. For instance, the birth of washing machine or vacuum cleaner which helped to cut down longer hours of house chores. We were being educated on the existence of not just phones and TVs but also on other electrical appliances that play a part in our lives.

The admission is free and you will be guided by a museum presenter. It’s open from Monday to Friday but there won’t be any guided tour on a Saturday. You can take pictures but no filming recording is allowed. If you are not even a Samsung fan, this place is still worth a visit. I began to appreciate all these innovations after the tour. Thank you to all the inventors for making all these technological advances possible. 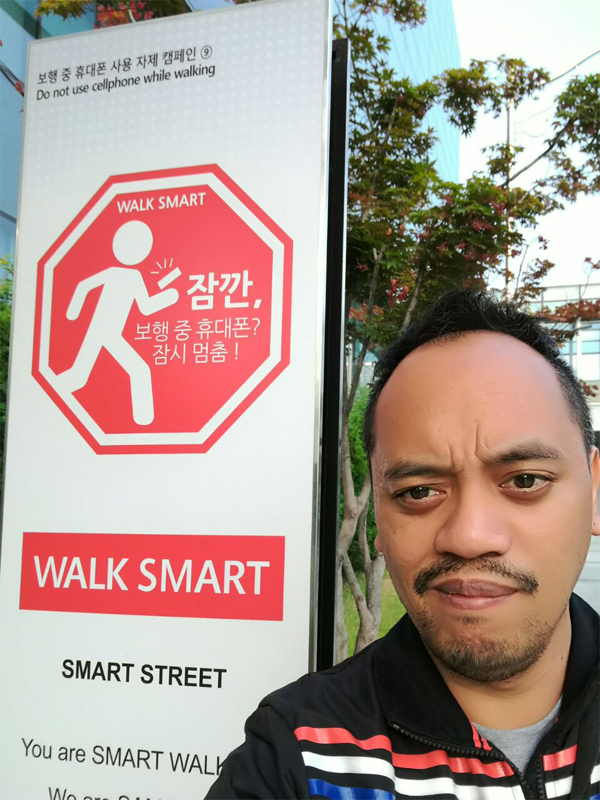 At the Suwon Digital City where Samsung Innovation Museum is located. This is one of the signs on the street. So be mindful when you walk 😉 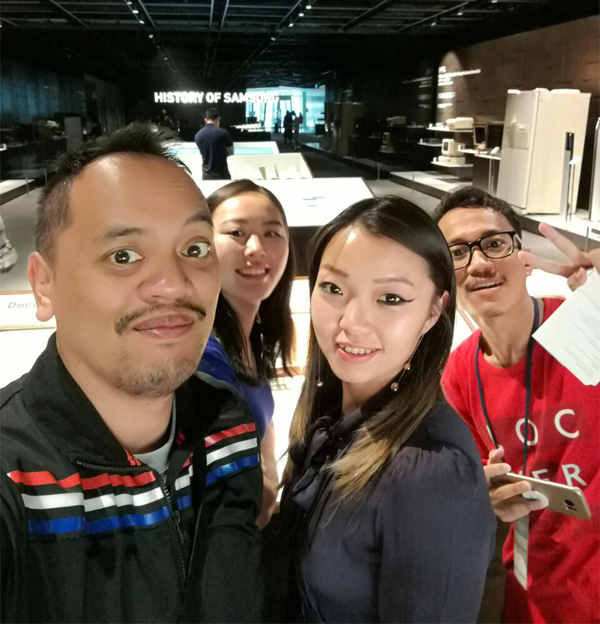 You’re not allowed to take close up shots in the SIM or even video recording. But this kind of shots or selfies are welcomed 😀 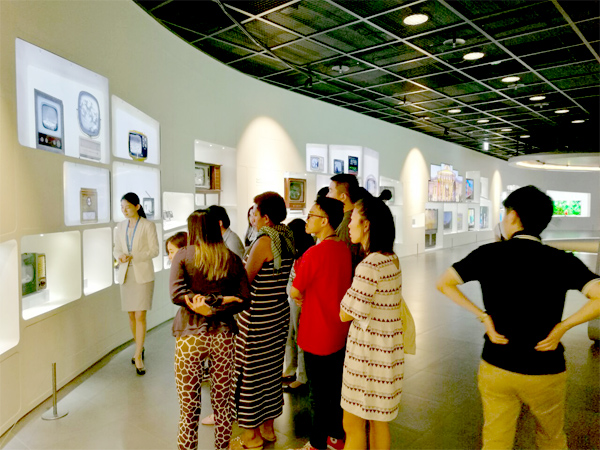 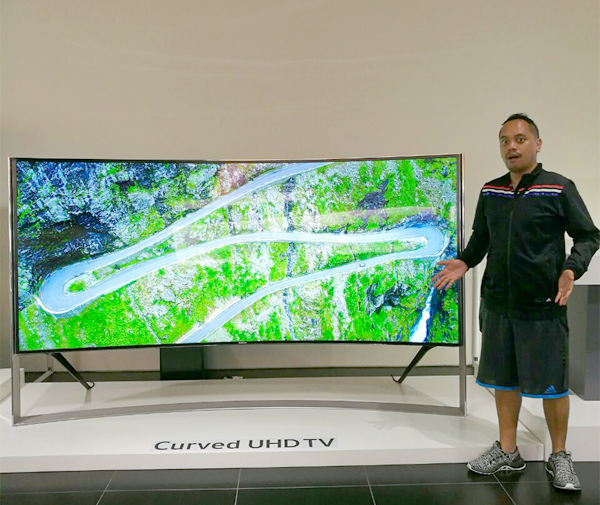 Arirang’s Heart to Heart show. It’s not as easy as 1-2-3 to be selected to be featured on Arirang News, one of Korea’s leading broadcasting news that has global reach of 138 million households. A big thank you to MOFA Korea for making this possible as I was one of the special guests for Heart to Heart show in Arirang TV. The other special guest was Ashani Yusron, a big Hallyu fan from Indonesia. The recorded show for our session will up in one or two weeks’ time. Thank you to Manu (the producer) and Jennifer, the host for Heart to Heart and not forgetting our special friend, Mary.

This particular episode talks about our take of Korean culture and how it has been well received in our respective countries and also a bit of background of what we do professionally in the line of being social influencers. I shall keep you posted when the show will be set for release. Thank you once again to Arirang TV for having us on your show. This is definitely a milestone for 2017. 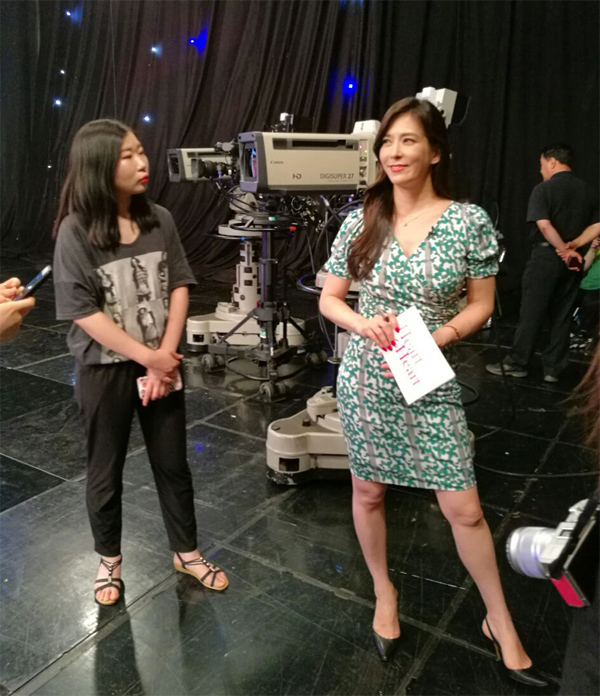 Thank you, Jennifer (right) for being such a sporting host 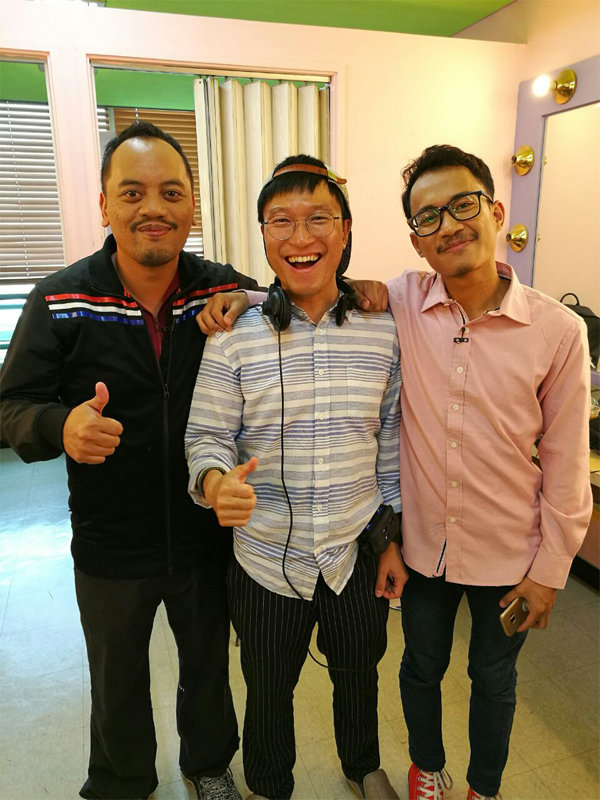 With the producer of Heart to Heart, Manu 😀 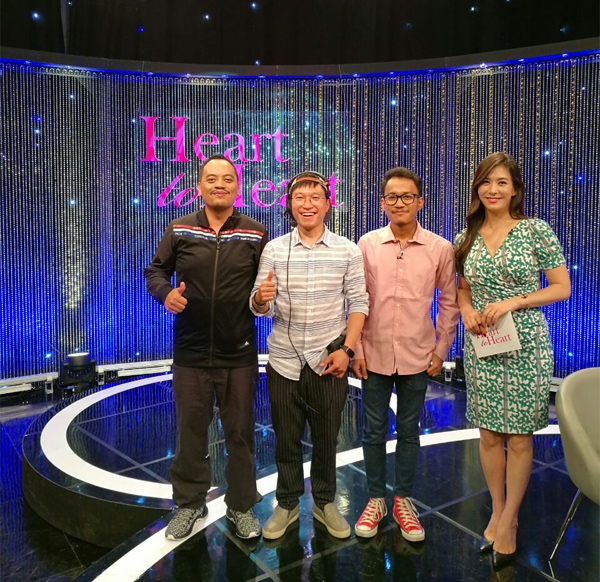 An awesome session with Jennifer. Can’t wait to see the actual show

Making bimbibap. Yes, this is the real deal. I normally being served at Korean Restaurants in Brunei but this one .. this one is the real deal. You get to see the traditional way of making bimbibap. For your info, bibimbap means mixed rice and in Korea, bimbibap is served as a bowl of warm white rice and topped with namul (sauteed and seasoned veggies, gochujang (chilli paste), soy sauce or doenjang (fermented soybean paste). Other additions are such as fried egg and slice beef. Then you stir the contents inside the bowl before you eat.

That day we visited a Korean restaurant (can’t remember the name) and we were given the experience to mix the bimbibap in a humungous bowl that is enough to feed at least a hundred people. I love the authentic taste of it too and the hospitality from the restaurant owners. Now being back in Brunei, I have more appreciation of how bimbibap is being served and maybe, just maybe, my expectations in terms of presentation and taste have slightly increased. 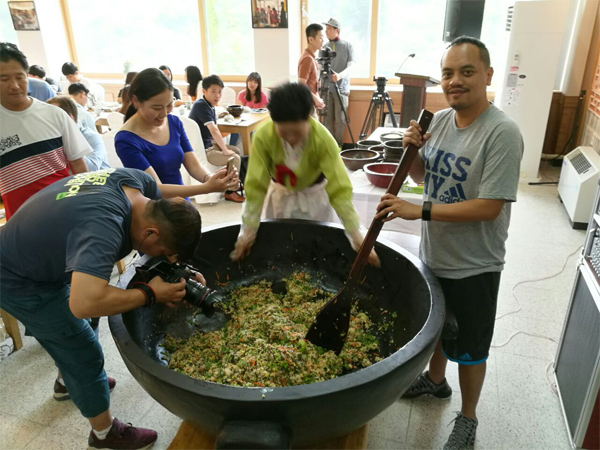 I had the privilege to stir this around. One massive bowl for bimbibap. This is how authentic it gets 😀

The customary selfie pose, of course, with bimbibap 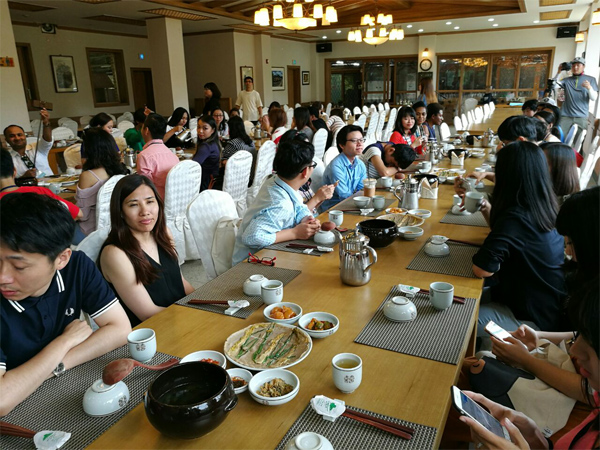 One of the best lunches during our trip 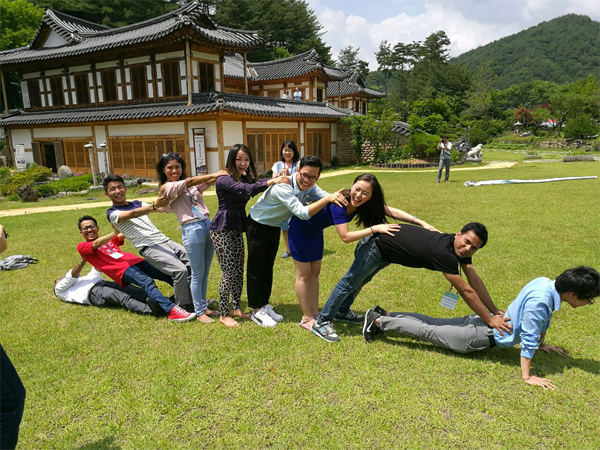 Having fun after an awesome bimbibap lunch

Farewell dinner. The awesome about this program was that we were fed very well and also on time. The program was so structured that they made meal times a priority and also on time. I don’t know how they did it but they pulled it off consistently for 5 straight days. Amazing!! Our final dinner was Seoul Marina which was like an hour away from our hotel, Koreana and we hoped for a variety of choices as we had too much of kimchi during our previous meals. And yes we did!! The food was great and it was also an emotional farewell session as a few representatives from each group shared their learning and experiences from the #ACYLC2017.

We have our own Facebook group page and it’s flooded with pictures and memories. You were right, this is not a good bye but merely a transitional period where we will have newer opportunities to meet once again. It has been three weeks and it’s still fresh in my memory. Thank you once again, MOFA Korea and The Korea Foundation for hosting us and this has been one of the best experiences in a long time. I hope to see more of this in the near future. 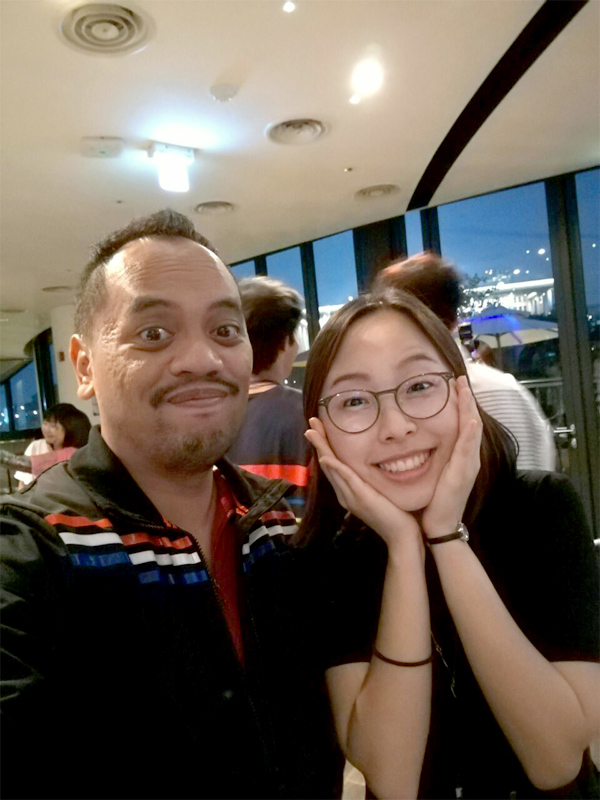 One of our cute volunteers from Korea. Thank you for helping us out. 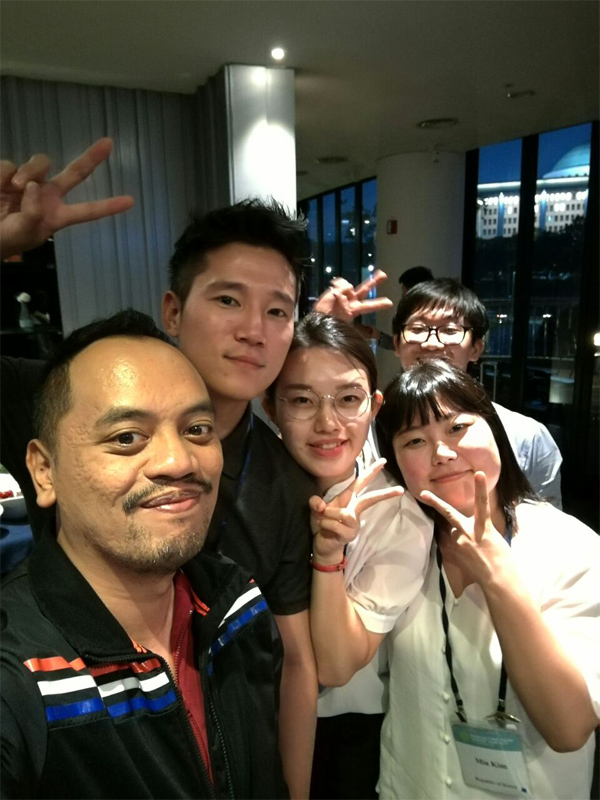 The volunteers from Korea Foundation 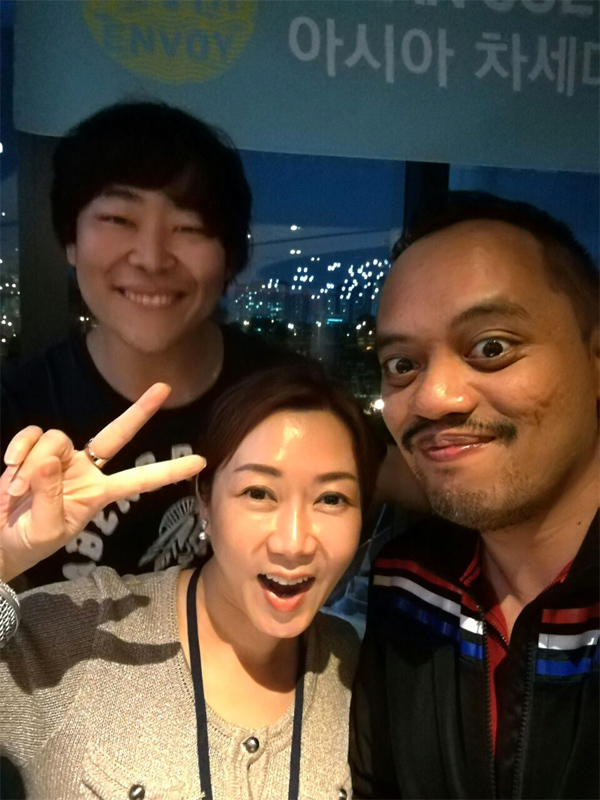 She’s one awesome emcee and is a TV presenter for Arirang TV. 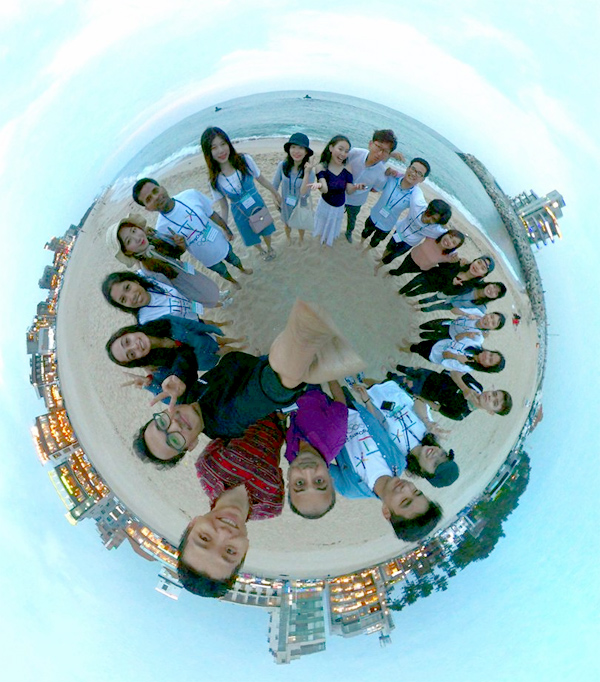 Nice shot with the Samsung 360 camera. Taken at Anmok Beach. 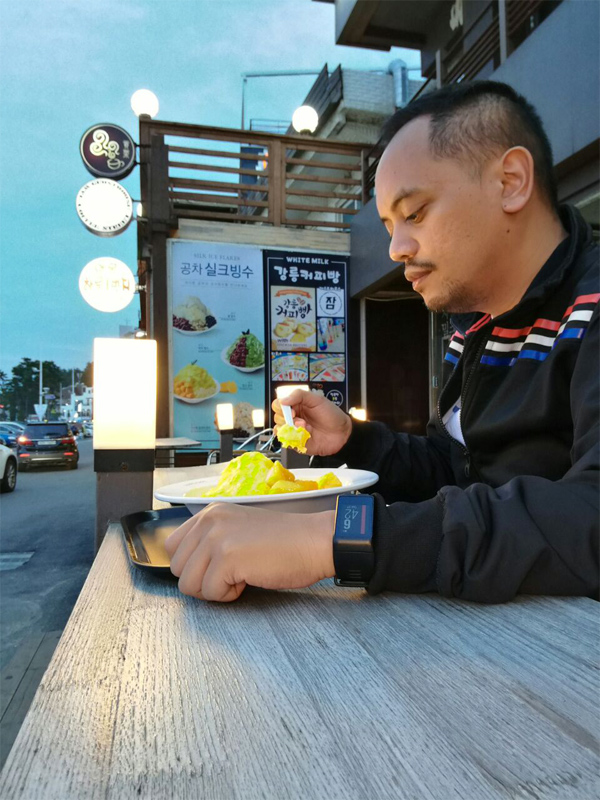 I had a nice bingsu at GongCha by Anmok Beach 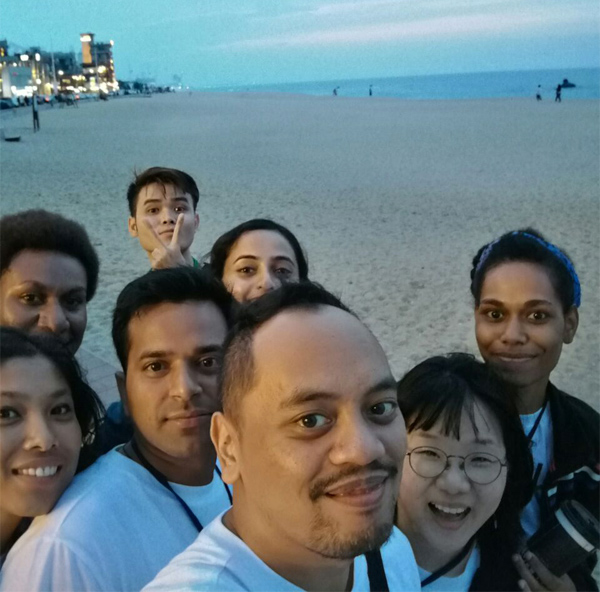 Strolling by the beach