Warning: count(): Parameter must be an array or an object that implements Countable in /home/rano365/public_html/wp-content/themes/yoo_nano2_wp/warp/systems/wordpress/helpers/system.php on line 61
 Rano360.com » New PEUGEOT 3008 – Advanced SUV

The new Peugeot 3008 has at last been unveiled. This long-awaited vehicle takes the C-SUV segment by storm, in a class of vehicles in full expansion across all regions of the globe. It takes on demanding customers looking for new and different experiences with a very strong hand. Whether by its spectacular latest-generation PEUGEOT i-Cockpit, by its exceptionally inspired design, by its optimised architectural efficiency or by its high-tech equipment, the new PEUGEOT 3008 SUV aims to assert itself from the off as a major player. It inaugurates for PEUGEOT a new SUV range for which it will be the worldwide emblem.

Last Friday saw the official launch of the new Peugeot 3008 at the Peugeot showroom at Kiarong. The attendees were in awe with the video presentation shown before unveiling the car. The Peugeot 3008 will be one of the sought SUVs in Brunei as it has a lot to offer with a very competitive price. You can now drive a Peugeot with advanced specs that all users will appreciate. It is no surprise why Peugeot 3008 was named Car of the Year. 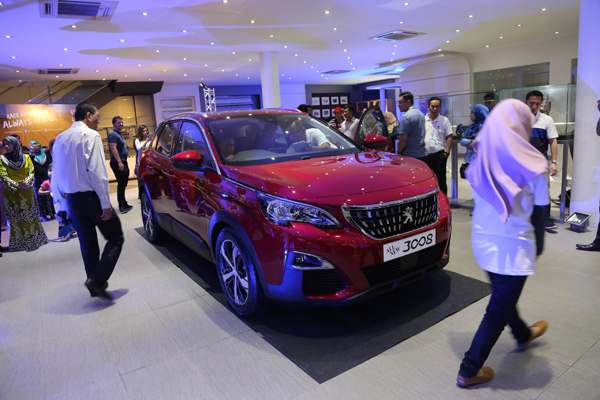 Check out the latest Peugeot 3008 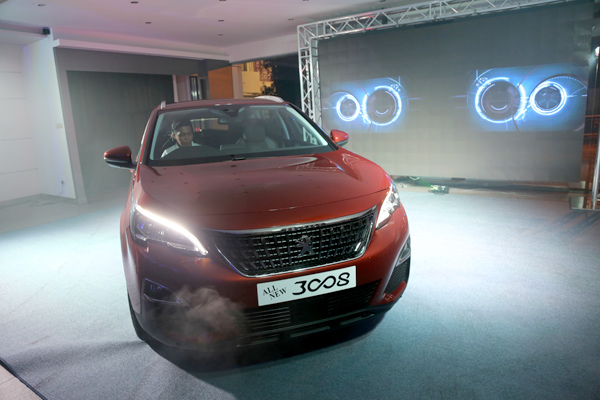 Makes me one to own one too

Getting into the new PEUGEOT 3008 SUV is to enter another world, surprising, original and oozing quality. A spectacular, almost futuristic dashboard immediately catches the eye. This coherent and highly technological ensemble is the latest generation PEUGEOT i-Cockpit®, a novel concept that has rewritten the book on the car cockpit. Here, everything seems to be at the service of the pleasure and concentration of the driver in a pronouncedly high-tech niche.

The steering wheel is even more compact and has been redesigned with two flats to make it easier to grip and to afford the driver maximum visibility and legroom.

The large 8” touch-screen resembles a tablet installed in the centre of the dashboard and is equipped with capacitive technology for greater reactivity and practicality. It is accompanied by six elegant piano-key “toggle switches” – giving direct and permanent access to the main control functions: radio, climate control, navigation, vehicle parameters, telephone and mobile applications.

The heads-up instrument unit unveils in series production a high-resolution 12.3” screen with futuristic graphics. It can be completely configured and personalised, and brings together all that the driver could want in his field of view. The visual impact of each setting is highlighted by a series of animations and transitions which are a treat for the eyes.

This on-board experience is equally well served by the richness of the interior, actively contributing to the excellent sense of perceived quality and modernity felt in the cabin. Material choices are inspired and their appearance uncompromising. Some of the areas are less commonly found in cars, such as the dashboard inlay….it’s all very modern and warm.

Whatever angle it is approached from, whoever sees the new SUV PEUGEOT 3008 for the first time is struck by the feeling of top-quality execution and of a high level of perceived quality. This exterior looks makes for the most fashionable SUV on the market. 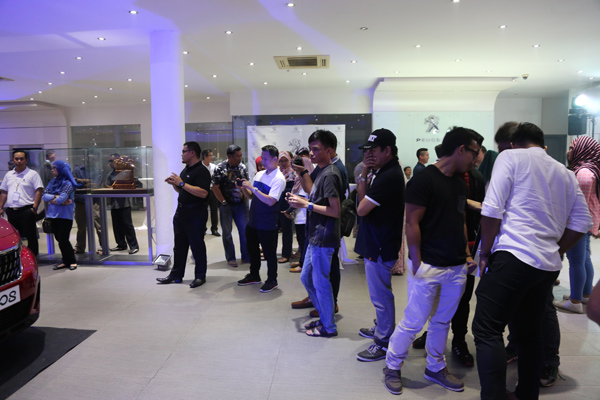 The attendees getting the first glance of the Peugeot 3008 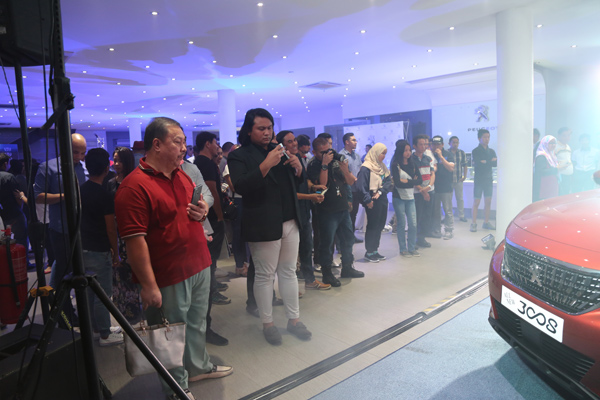 Getting up close and personal

The reputation of the Lion brand in terms of driving experience is already well-established, the skill of the in-house development engineers is in repeatedly producing the most satisfying vehicles to drive, whatever their size. In the case of an SUV, the challenge is considerable: raised ride-height, high driving position, raised centre of gravity…In this class of vehicle, styling choices are often made to the detriment of driveability.

The new PEUGEOT 3008 is a true SUV, but above all it’s a PEUGEOT! And like any true SUV it has genuine off-road capability, thanks to the Advanced Grip Control and the Hill Assist Descent Control.

With the Mirror Screen function, a Smartphone screen can be reproduced on the touch-screen to make best use of its applications. It is compatible with MirrorLink protocols (Android smartphones), Android Auto and Apple CarplayTM (iPhone 5 onwards). And with a simple touch of a button on the steering wheel, there is a remote voice recognition function through the smartphone (Android SVoice and Apple Siri). Without taking his eyes off the road, and in complete safety, new possibilities are opened up to the driver: make calls, choose music, read and send text messages, get route information…permanent connectivity in operation!

Supported by an arsenal of driver aids…

It is a joy to drive, a feeling amplified by the compact steering wheel, and the driver can make the most of the dynamic abilities of this SUV, especially thanks to the support of the numerous driver aids available to him. These latest generation ADAS (Advanced Driver Assistance Systems) minimise any source of danger on the road through an arsenal of safety features:
– Active lane departure warning
– Driver attention warning
– Speed limit sign recognition and recommendation
– Cruise Control with speed limiter
– Visiopark

The new PEUGEOT 3008 is produced in the Sochaux plant, and the French Trémery and Douvrin factories supply all the power-plants. It will therefore carry from the outset the “Origine France Garantie” label. 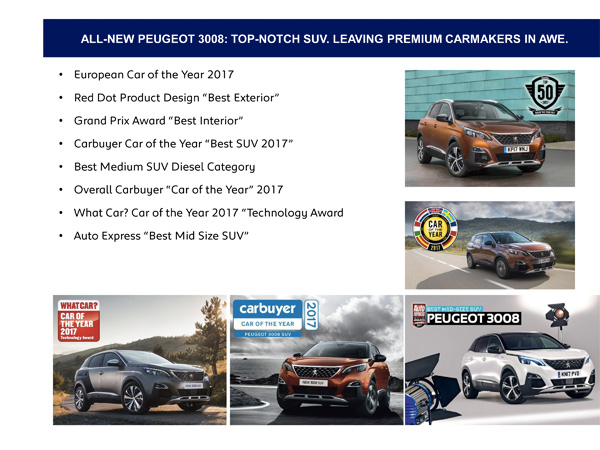 Check out the accolades earned for Peugeot 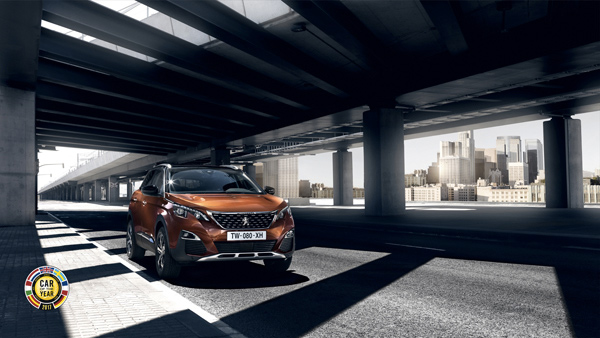 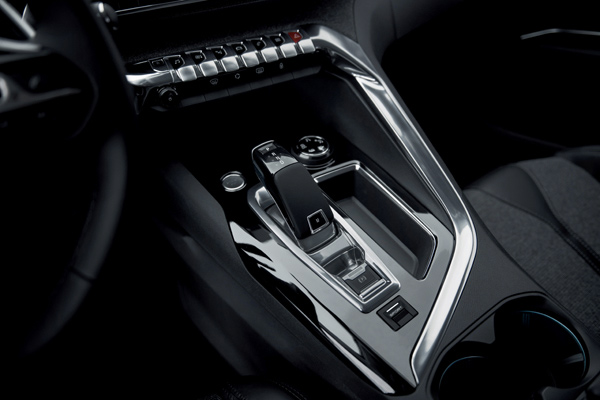 Loving the functions incorporated inside the Peugeot 3008 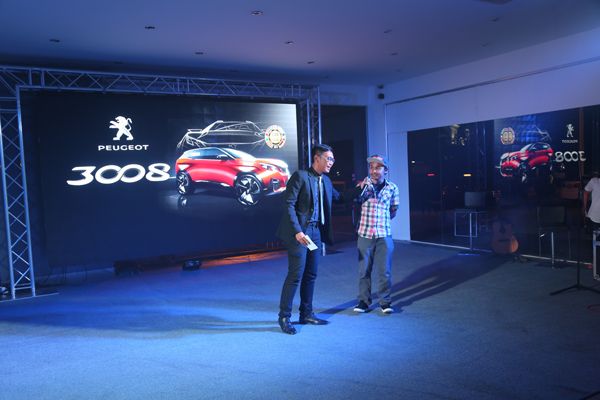 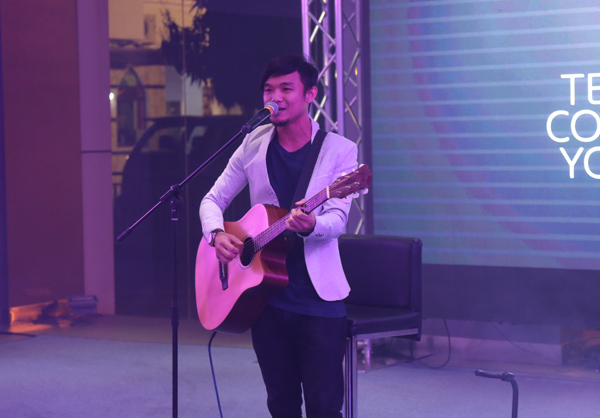 Another local talent being unveiled to entertain the crowd