Warning: count(): Parameter must be an array or an object that implements Countable in /home/rano365/public_html/wp-content/themes/yoo_nano2_wp/warp/systems/wordpress/helpers/system.php on line 61
 Rano360.com » Indian Chamber of Commerce loses appeal

The final straw. Everyone is entitled to appeal after being given a judgment. A few months ago, the High Court ordered the Indian Chamber of Commerce (ICC) to pay BND 950,000 in damages to prominent businessman Ramesh Jiwatram Bhawani (BND 650,000) and Abdul Hamid bin Abas (BND 300,000) in the biggest defamation suit in Brunei Darussalam. You can read my previous article here. The ICC then appealed the verdict to The Court of Appeal.

In the end, the Court of Appeal upheld the High Court’s judgment which means the appellants, ICC and 24 defendants, will still have to settle the liabilities of general and aggravated damages to both the plaintiffs.

Presiding Justice John Barry Mortimer with Justices Burrell and Seagroatt handed a written judgment where the judges upheld the previous awarding of BND500,000 to the first plaintiff Ramesh and also BND225,000 to the second plaintiff Abdul Hamid in general and aggravated damages, excluding the exemplary damage awarded of BND150,000 and BND75,000 that was awarded to both plaintiffs respectively in the High Court’s judgment, citing the lack of evidence in proving that the defendants issued the letter for profit gain. 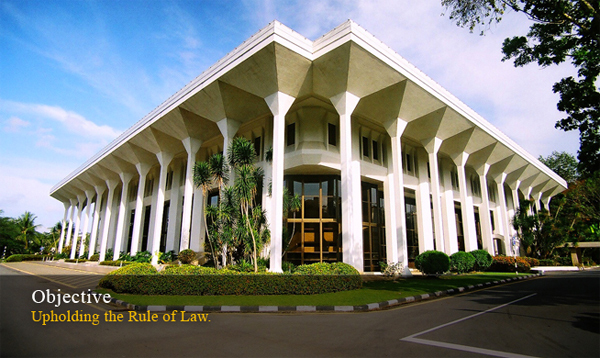 The Court of Appeal handed the final written judgment for the civil case between plaintiffs, Ramesh Jiwatram Bhawani and Abdul Hamid bin Abas against The Indian Chamber of Commerce and 24 of its members on 12th May 2018. Image courtesy of judiciary.gov.bn

It all began with a letter dated 5th April 2010 by the defendants to the Indian High Commissioner. It was written by the second defendant as President of The Indian Chamber of Commerce on the Chamber of Commerce’s headed notepaper and is counter signed by 23 other members or office holders of the chamber.

According the judgment, the letter contained, beyond argument, libellous material against Ramesh Jiwatram Bhawani. It noted that “Ramesh…. developed a business known as YMRM… He deals with counterfeit branded goods …. has recently been increasingly in various malicious activities…” There are even words such as “money laundering” and “mafia style gangster” and said in the lines that “Ramesh is widely suspected of laundering huge sums of money and threatening people in due course if at all someone tends to talk about it or report it.”

Other references were also made on Ramesh such as the use of “dirty words” and “dirty tactics”.

There was a second letter dated on 29th November 2010 also written on the notepaper of the Chamber of Commerce and signed by the fourth defendant as general secretary of the chamber. It generally disparages Ramesh alleging “dubious activities and anti-social behaviour”. It was more of a repetition of the first letter, alleging that his “so-called business activities are in actual fact a sham to cover his illegal money-laundering operations.

Both letters (dated 5th April 2010 and 29h November 2010) called upon The Indian High Commission to “investigate the matter rigorously.. and we are pretty sure that something worthwhile will be unearthed.”

The Court of Appeal replied to the appellants’ arguments, six of them.

1st ground – That Justice Findlay erred in holding all the defendants liable in damages in relations to the publication of the 29th November 201 when the judge held that only the 1st and 4th defendants were liable for the defamatory matter in that publication.

Appeal of court response – Justice Findlay made it clear in his findings that although he found for the first plaintiff (Ramesh) on the alleged libel in the letter of the 29th November 2010, he made no specific award of damages in respect of it. In other words, he confined himself to the effect of the letter of the 5th April 2010.

2nd ground – Justice Findlay erred by awarding join and several damages against all defendants without apportioning the awards between the defendants according to their respective aggravating and exemplary circumstances.

Appeal of court response – All defendants are equally liable. The form and content of the letter of the 5th April constitutes equal responsibility. The evidence of the 14th defendant could not relieve him of his equal responsibility. He was one of the Public Relations Officers (and probably a management committee member). There is no valid distinction to be drawn between any of the defendants all of whom authored the libel by “confirming their support by signing.”

4th ground – Holding the defendants responsible for damages flowing from the publication on 16th June 2010 was wrong in law.

Appeal of court response – There is no merit in the argument on absolute privilege. The High Commission acted upon the letter of the 5th April 2010. It circulated the generality of the libel to a significant number of Senior Bruneian Officials – 18 in all. Even if the High Commission itself were to establish some form of privilege, which is dubious, their publication was generated, even demanded, by the content of the 5th April letter from the Indian Chamber of Commerce. The backlisting which lasted for one year, was in their view a direct consequence of that demand. The letter, in the final paragraph, contains the exhortation to the High Commission “unless he is curbed and stopped…” which is in effect a demand that he be blacklisted.

Appeal of court response – This area was dealt in the context of ground 4. The chain of libelous publication was not broken by any “novus actus”.

6th ground – The award damages was disproportionately high compared with other cases.

Appeal of court response – The judges agreed that Justice Findlay found these allegations to be “of the utmost gravity”. Looking at the exemplary damages, the court of appeal reviewed if the appellants have deliberately defamed for profit. Only then the plaintiffs be awarded for exemplary damages (punitive sum). There is no evidence that suggested the profit has motivated the defendants though it is possible, simply on the basis of an understanding of human nature, that some defendants had in the mind the commercial or financial benefit to themselves if they affected the destruction of the plaintiff’s business.

As for aggravated damages, the court of appeal reviewed and agreed that it is appropriate to award such damages or include int eh award of general damages an element for aggravating factors. This include malice and the increase injury to a plaintiff by a defendant. It was noted that the civil action by the plaintiffs commenced five years ago though the incident has happened 8 years ago. It was also noted that there has been no apology or offer of amends over the whole period of that time.

The defendants’ attitude has been dismissive and persistently insulting. The plaintiffs have borne the brunt of this arrogant defamatory treatment in this long interim. A serious element of aggravation is beyond argument.

According to the written judgment, exemplary damages has been excluded but the aggravated damages remained. This was a serious libel calculated to destroy reputations using powerful institutiions or authorities to that end. Their motion was nasty, vicious and coordinated.

Conclusion of the written judgement by the Court of Appeal

Upon consideration of similar cases, Justice Seagrott concluded that they are not out of line with what the appellants argued, and decided to dismiss other grounds of the appeal, excluding the punitive damage and ordered them to pay general and aggravated damages award to the plaintiffs as a final judgment. The judgment was written and submitted on 12th May 2018.

Rano’s thoughts: Despite the exemption of the exemplary damages, It is still the biggest defamation (libel) case in Brunei Darussalam with a total of BND 725,000. The second biggest case was where Abrahams, Davidson and Co. won a case against the defunct News Express back in 2002. The plaintiff was also represented by Pg. Izad and & Lee and the total award was BND 550,000.

The defendants have used their final straw through the Court of Appeal and they will have to pay a total of BND 725,000 by end of the month (May 2018). Defamation is definitely a no go zone and it has landed many individuals/professionals/companies into trouble. This is definitely one civil case that has been going around for years and after 5 years of trial, the saga of the civil case is over.

I just read an interesting article that even bloggers like myself can be punishable of “libel or slander” and even worse, in addition to being liable in a civil court for damages, defamation is also a crime punishable under the penal code with a fine and a jail term. So, what’s next?

Ladies and gentlemen, do think twice before you make such actions.