Warning: count(): Parameter must be an array or an object that implements Countable in /home/rano365/public_html/wp-content/themes/yoo_nano2_wp/warp/systems/wordpress/helpers/system.php on line 61
 Rano360.com » 9000 engines and 700 cars are made at this Audi factory. Daily. 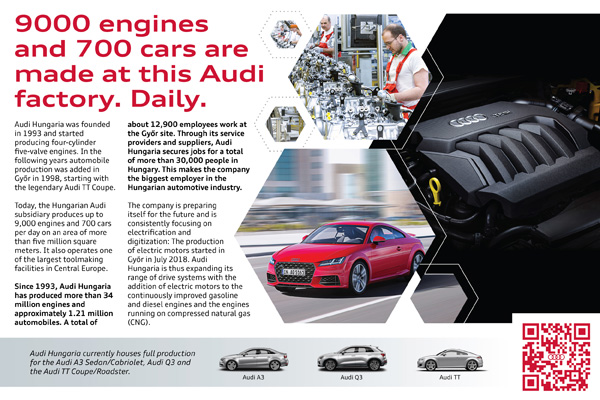 Audi Hungaria was founded in 1993 and started producing four-cylinder five-valve engines. In the following years automobile production was added in Győr in 1998, starting with the legendary Audi TT Coupe.

Today, the Hungarian Audi subsidiary produces up to 9,000 engines and 700 cars per day on an area of more than five million square meters. It also operates one of the largest toolmaking facilities in Central Europe.

Since 1993, Audi Hungaria has produced more than 34 million engines and approximately 1.21 million automobiles. A total of about 12,900 employees work at the Győr site. Through its service providers and suppliers, Audi Hungaria secures jobs for a total of more than 30,000 people in Hungary. This makes the company the biggest employer in the Hungarian automotive industry.

The company is preparing itself for the future and is consistently focusing on electrification and digitization: The production of electric motors started in Győr in July 2018. Audi Hungaria is thus expanding its range of drive systems with the addition of electric motors to the continuously improved gasoline and diesel engines and the engines running on compressed natural gas (CNG).