Warning: count(): Parameter must be an array or an object that implements Countable in /home/rano365/public_html/wp-content/themes/yoo_nano2_wp/warp/systems/wordpress/helpers/system.php on line 61
 Rano360.com » 14 in a row…

The Banker’s twentieth annual Bank of The Year awards were presented at a gala black- tie dinner at the Sheraton Grand London Park Lane, London on Thursday 28 November 2019. Mr Ti Eng Hui, CEO of Baiduri Bank received the award on behalf of the Bank.

Speaking about the Bank’s latest achievement, Ti said, “This award is yet another testament to the strides and accomplishments the Bank has made over the past 18 months. This year alone, the Bank has taken significant steps towards moving the organization to greater heights by investing heavily in cutting-edge technology, customer data security and its human resource capabilities.”

Among recent strategic initiatives undertaken by Baiduri Bank is a new digital banking platform targeted for launch in the first quarter of 2020. Other initiatives include enhancing the Bank’s human capital capabilities and the launch a local business skills training series as a long-term commitment to helping develop local business in partnership with Darussalam Enterprises (DARe).

Elaborating on a recent strategic business move, Ti said, “Baiduri Bank has the largest card merchant base in the country. By partnership with DST, Brunei’s premier telecommunications provider to launch an e-Wallet, the synergistic effect will be the creation of the largest digital payment ecosystem in the country with connectivity to regional and international payment platforms.” 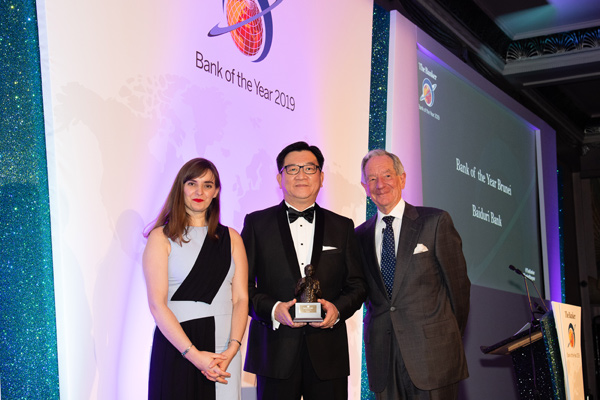 On the topic of human capital, Ti said, “We invested in a world-class online training platform to upskill our personnel with the intention to certify them to global industry standard; and we will soon be moving onto a cloud-based human capital management platform provided by another global service provider.”

“Under our recently launched Management Associate Programme, two candidates will undergo 12 months of intensive development aimed to maximizing their potential and advance in their career within the Baiduri Bank Group.”

Speaking on the latest award, Ti stated, “It gives us great pride in being recognized as the Bank of the Year for Brunei by a leading international financial publication. I would like to thank our customers, business partners and associates for the trust and support they have given us over the years making us the award-winning bank that we are today.”

In determining the award winners, The Banker, the world’s premier banking and finance resource, looks beyond raw data. The editorial team looks for evidence of banks setting new standards for their local industries whether it is through the use of new technology or innovative ways of expanding their business. The judging is carried out by an editorial committee on the basis of submitted entries, data from The Banker’s database and the editor’s personal knowledge of the market.