Warning: count(): Parameter must be an array or an object that implements Countable in /home/rano365/public_html/wp-content/themes/yoo_nano2_wp/warp/systems/wordpress/helpers/system.php on line 61
 Rano360.com » Honey Carsmart Hari Raya Promotion 2017 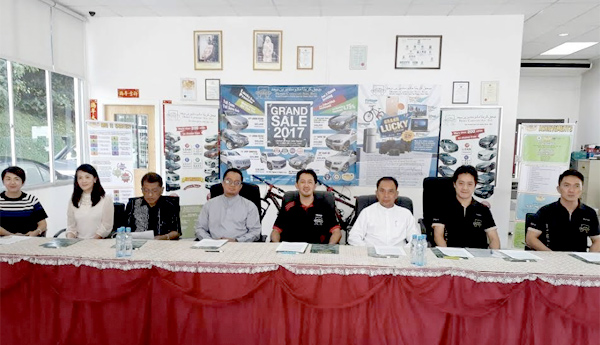 The agency is organizing its 3rd Hari Raya Grand Sale event as gratitude of appreciation to the continuous support, loyalty and trust from the customers over the years. Light refreshments will be served and goodie bags will be given to every visitor who register themselves at the event. On these limited three days, the company will also be giving out a 3 months free installment and 3 times free general servicing to customers who register themselves and also purchase a used car during this weekend only.

As part of giving back to community, the management has agreed that for every car that is sold between these 3 days, a contribution of $300 will be distributed into a charity pool that will be equally distributed for donation purposes to Pusat Ehsan Al-Ameerah Al-Hajjah Maryam, SMARTER Brunei & DANA Pengiran Muda Mahkota Al-Muhtadee Billah. The heads of department that were present were Hj Ahmad Bin Hj Abd Rahman, Head of Policy & Planning, Malai Hj Abdullah Bin Malai Hj Othman, President of the Society for Management of Autism Related Issues and Awg Samsudin Bin Hj Puasa, Secretariat respectively.

The total proceeds donated to Pusat Ehsan Al-Ameerah Al-Hajjah Maryam and SMARTER Brunei last year was $7,500. With the support of its loyal customers, the company is looking forward for a higher sales target this year to be contributing to the 3 charity bodies.

Representatives from one of the financing institutions to be on duty for the convenience for customers should they need to apply for financing on the spot. A motor insurance agency will also be available to customers, who wish to renew their motor insurance.

Due to customers’ demand and positive response, this year the company has extended the promotion duration to 3 days and has confirmed to display over 80 selected units and these selection also include makes such as, Audi, BMW, Mercedes Benz, Jeep, Lexus and other popular Japanese and Korean makes. However, these units shall be based on a first come first serve basis in order to be fair to all customers.

The company would also like to take this event to inform the public that any customer who bought cars from them between 19th May 2017 – 30th September 2017, are eligible to participate in their Lucky Draw promotion, which will be held on 13th October 2017. Prizes will include popular smart phones, house equipment, flat screen television set and many others.

Honey Carsmart Sdn Bhd encourages its customers and followers to check out their social activities at their Facebook page and Instagram @honeycarsmartbrunei for weekly updates on their announcements and promotions.