Warning: count(): Parameter must be an array or an object that implements Countable in /home/rano365/public_html/wp-content/themes/yoo_nano2_wp/warp/systems/wordpress/helpers/system.php on line 61
 Rano360.com » brunei conference

When you are climbing a mountain there is a summit , in life all you find is an endless wall. You can take the easy way and slide endlessly into the darkness or take the hard way and climb into the eternal light. Either way, there is no end to how far you can fall nor how high you can climb – Dananjaya Hettiarachchi. Image taken of Dananjaya Hettiarachchi’s Facebook page.

He’s known as “Dan” by many and I’ve been following his journey on IG and Facebook and even on the internet. Though he was a champion two years ago, he still is one of the most sought speakers around the world. He has been traveling around the world and his next date will be Brunei before he heads off to Amsterdam (Holland), Hiroshima (Japan) and Richmond (USA) to cap off the year. Awesome!!!

If you meet him in person, only one word to describe him – charismatic (and super cool). He has been in a journey of toastmasters or public speaking for 10 years. He loves to inspire the thousands in bettering their communication skills and he is very popular in schools.

The Brunei Conference committee is very privilege to have his presence in Brunei on 28th October to 29th October. We are certain that his presence and his keynote speech will have a positive ripple effect on the audience and hoping for more youth to attend the conference.

This is slated to be the biggest toastmasters event ever hosted in Brunei Darussalam because we have three world champion speakers – Willie Jones, Dan the Man and reigning champion Darren Tay. So yes, sometime to look forward to and the target audience will be the youth, working class, teachers, parents, students, professionals, government officials and entrepreneurs.

A big thank you also to the sponsors, partners and supporters of this event – Brunei Shell Petroleum, Progresif, Brunei Gas Carriers, Brunei Tourism under the Ministry of Primary Resources and Tourism, RYS Entertainment, Armtrix Enterprise, NBT, BIG magazine, AKK Design, The Coffee Bean & Tea Leaf, Rizqun International Hotel, Aiking (03), Royal Brunei Catering and many more. I would also like to acknowledge the Ministry of Home Affairs for approving this event.

So once again, If you are interested, please reach me at 8677773 and you can read more details here on our official website. 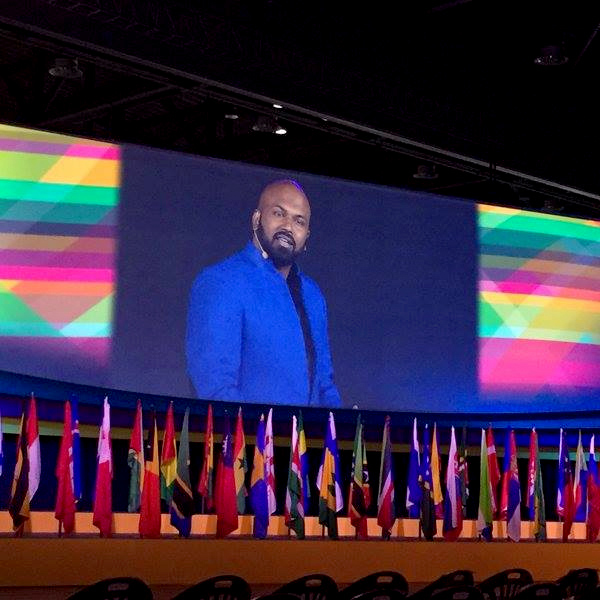 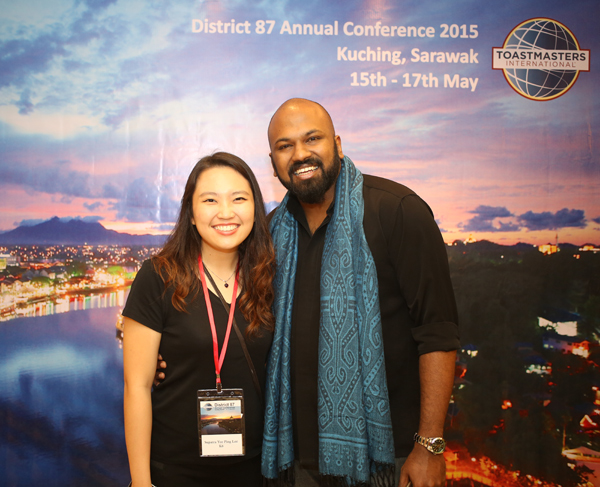 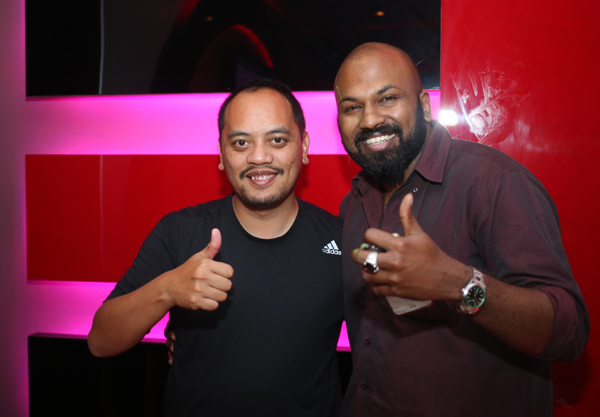 My photo opp with Dananjaya last year in Kuching.

Another champion making its way to Brunei is Darren Tay. Back in August, Darren Tay, was crowned the 2016 World Champion of Public Speaking in Washington DC and his story revolved around bullying. ’Im still amazed the fact that the past three winners of the World Champion of Public Speaking have come from Asia. Amazing feat!! First we have the charismatic Dananjaya Hettiarachchi (from Sri Lanka) who won in 2014 and he will be invited for the Brunei Conference in October. The following year was Mohd Qahtani from Qatar in 2015.

Looking at his resume, I’m pretty impressed for a man of his age (only 27) to achieve many things. According to his website, he is a prolific public speaker, debater and professional trainer. He founded the Public Speaking Academy in 2009 and has led the Academy to scale great heights in the school and corporate domains; including the successful organization of the annual National Public Speaking Competition since 2010.

He even won the Toastmasters International District 80 Speech competition in 2009, 20012 and 2014 for Speech Evaluation and Table Topics. Amazing feat indeed. He has also published his best-selling public speaking guidebook “Express to Impress” in 2012 and looks forward to subsequent publications in the future.

So it’s a done deal that he will be delivering a workshop in Brunei this October. If you are interested, please reach me at 8677773 or email at bruneiconference2016@gmail.com and you can read more details here on our official website. 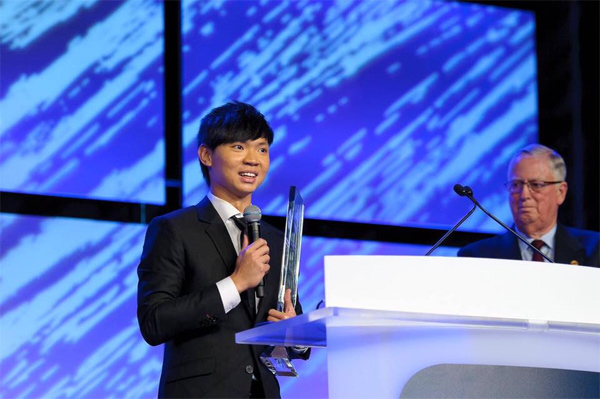 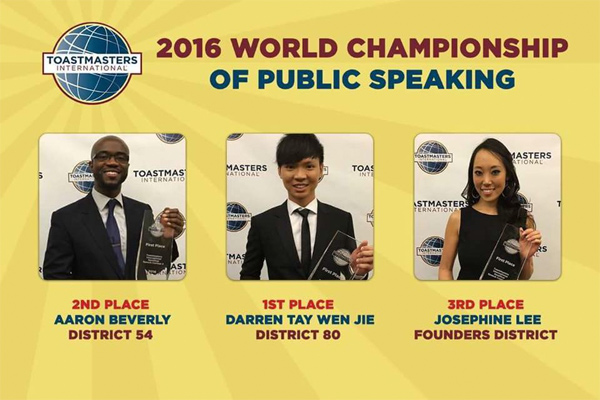 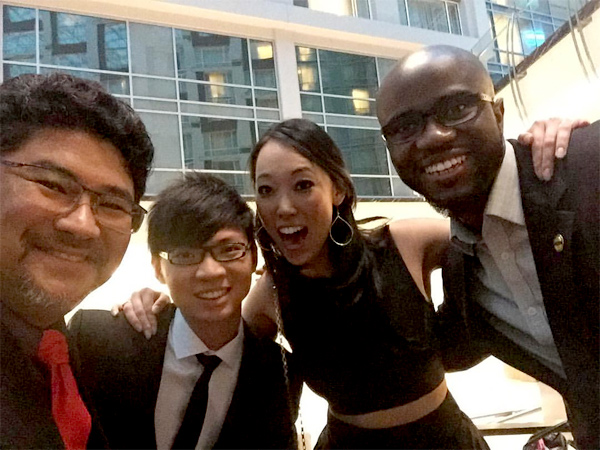 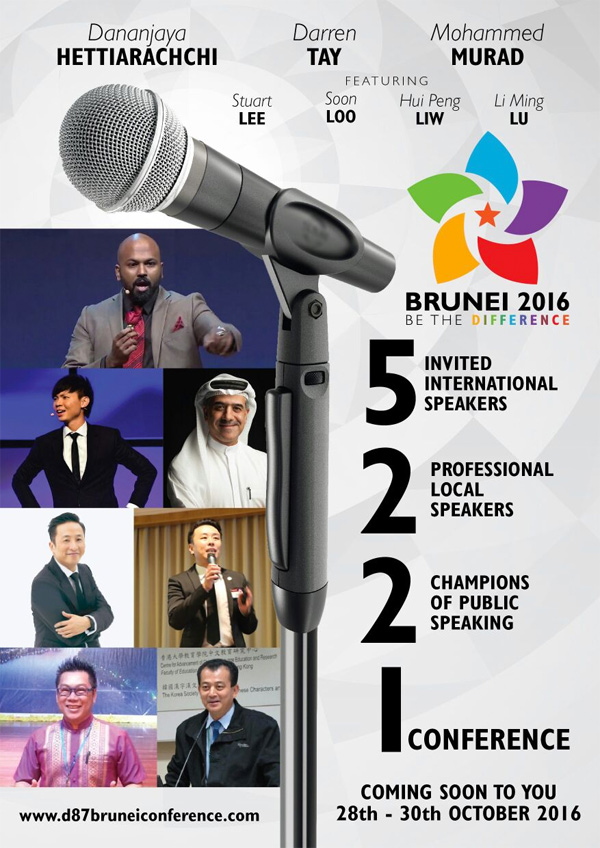 That’s not all. In conjunction with the Brunei Conference 2016, we will be hosting the final leg of the Humourous Speech Contest and Speech Evaluation Contest on the final day of the Brunei Conference, slated for Sunday, 30th October. Another awesome news is that two of the finalists are members of Brunei Toastmasters (Area K6) as they won their rights when they became champion in Division level two weeks ago at Kota Kinabalu.

Allen Ang, a representative of The Brunei Advanced Speakers’ Club, won for Humourous Speech Contest. With his winning speech ‘My Dream Job’, he told hilarious tales of the hardship of being a salesman and shared silly situations that induced fits of laughter from the audience. Pooja Shivanand, a member of Brunei Speakers’ Club, won in the Speech Evaluation Contest. She is one of our talented evaluators in Brunei toastmasters and it’s no surprise she made it this far. So both contestants will have to fight it out again in Brunei Darussalam to vie for the District Champion in Humourous Speech and Speech Evaluation.

On his victory and competing in the finals, Allen, a Permanent Resident in Brunei, said, “I’m blessed and grateful for the opportunity to speak in front of my hometown. The contest in KK was very fruitful, as I got to meet people who believe that contests stimulate progress, both in communication and leadership skills.”

Pooja, who lectures for the Microbiology course at the Faculty of Science, Universiti Brunei Darussalam, commented, “I gratefully acknowledge the support and encouragement of Brunei Toastmasters… I consider myself fortunate to represent Division K right here in Brunei. I eagerly look forward to this opportunity to showcase Brunei talent.”

The District 87 Semi Annual Conference in Brunei will also see World Champions in Public Speaking conducting educational workshops on Communication and Leadership Skills, with networking opportunities at the Gala Dinner.

The conference, open to the public, will take place from October 28 to 30. For more information, visit www.d87bruneiconference.com. 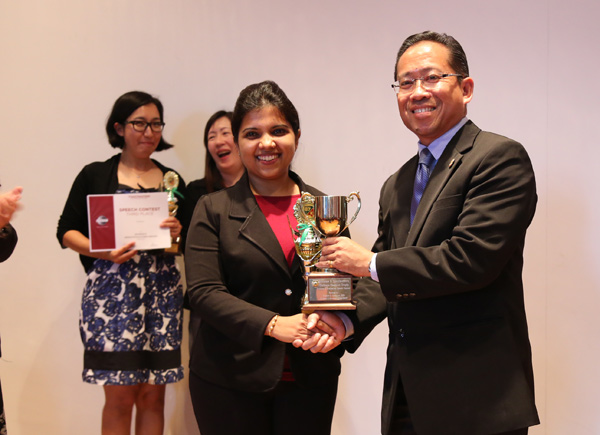 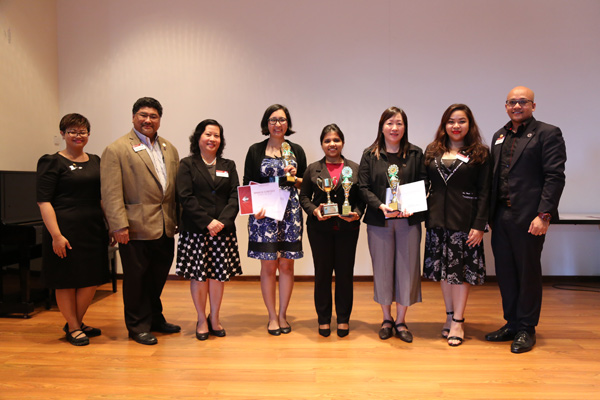 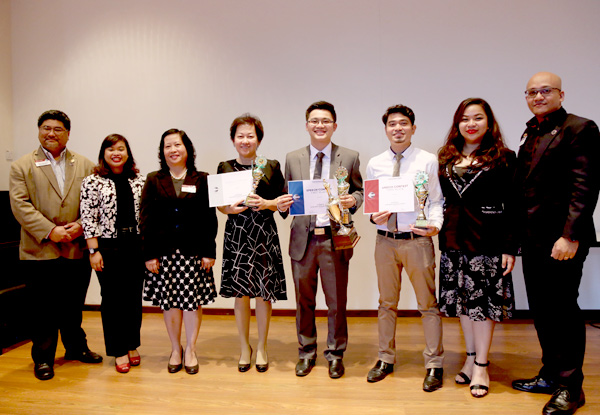 Allen Ang won Humourous Speech Contest on Division level for the second time. He won it two years ago, also in KK. Now he will compete in the final leg in Brunei Darussalam. 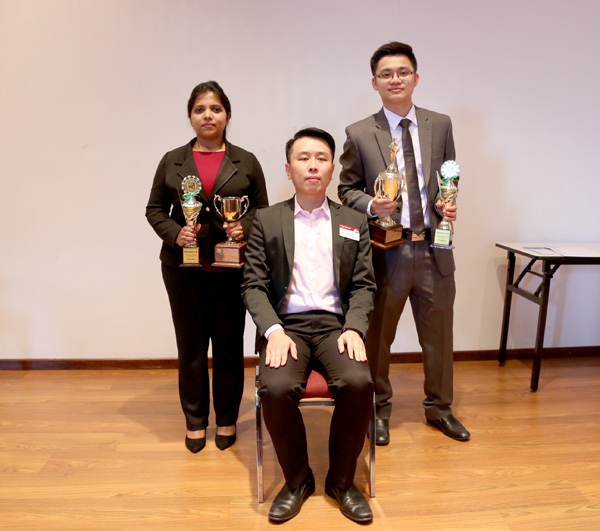 Pooja and Allen with their mentor Stuart Lee. All the help really paid off 😀 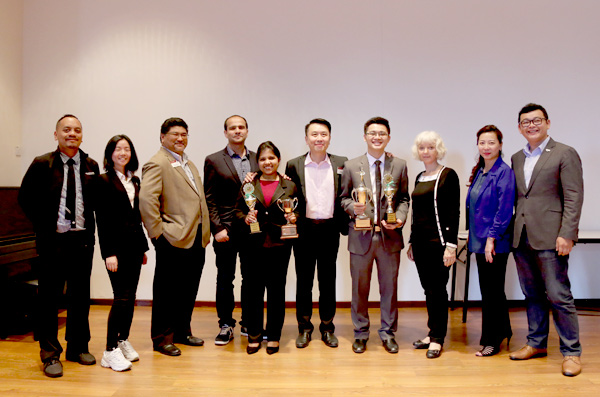 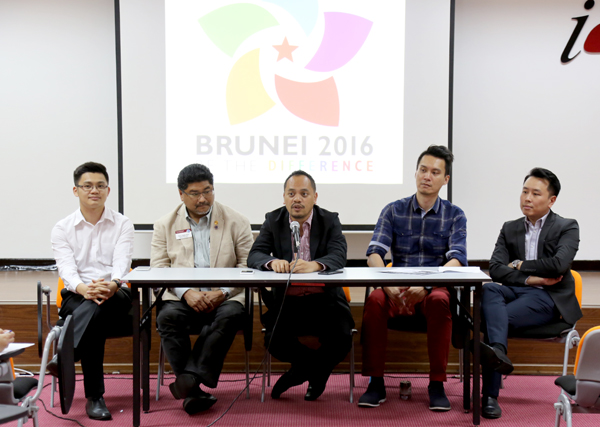 Allen Ang, Mandarin Coordinator for Brunei Conference, Shawn Cassidy Narcis, Protocol Director and District 87 Program Quality Director, Rano Iskandar as the Organizing Chair of Brunei Conference, Gerald Goh, Marketing Executive of Brunei Conference and Stuart Lee, one of the featured speakers of the event in yesterday’s press conference. Thank you so much to the local press for the coverage

Each year, the Toastmasters Semi-Annual District Conference culminates in the final round of the Humorous Speech and Evaluation Contest, where the District Champion is chosen. In this exciting event, 30 English & Mandarin contestants from Brunei, East Malaysia and Indonesia deliver 5 to 7 minute humorous speeches and 3 minutes evaluation on a test speaker that are judged by a panel of experienced Toastmasters. After few months of competing in club, area and division these contestants have advanced for the chance to win this prestigious accolade.

This year, Brunei was chosen to host the event at Rizqun International Hotel from 28th to 30th October. As an integral part of the conference, educational workshops are conducted by reowned public speakers, trainers and industrial leaders. For the first time, the conference will feature 3 World Champions of Public Speaking, Dananjaya J. Hettiarachchi (Sri Lanka), Willie Jones (USA), and Darren Tay (Singapore) who deliver his semifinal speech and Past President of Toastmasters International, Muhammed Murad (Dubai).

Other featured speakers include Soon Loo, CEO of Darussalam Enterprise and a local renowned speaker Stuart Lee, an HRDF-certified trainer and consultant. There are also two Mandarin speakers – Lu Li Ming (Sandakan) and Liw Hui Peng (Bintulu) for the Mandarin session. This is bound to be the biggest toastmasters event ever in Brunei Darussalam. 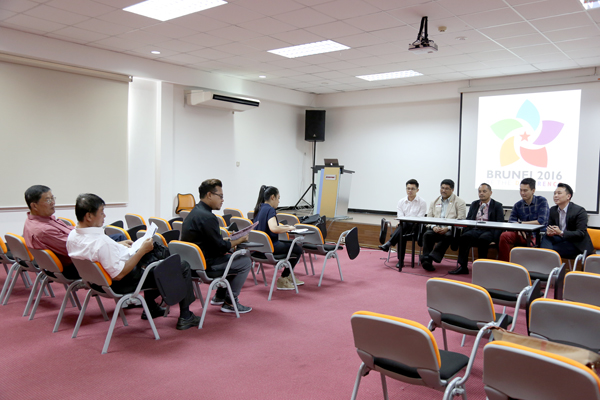 Press conference with the local press 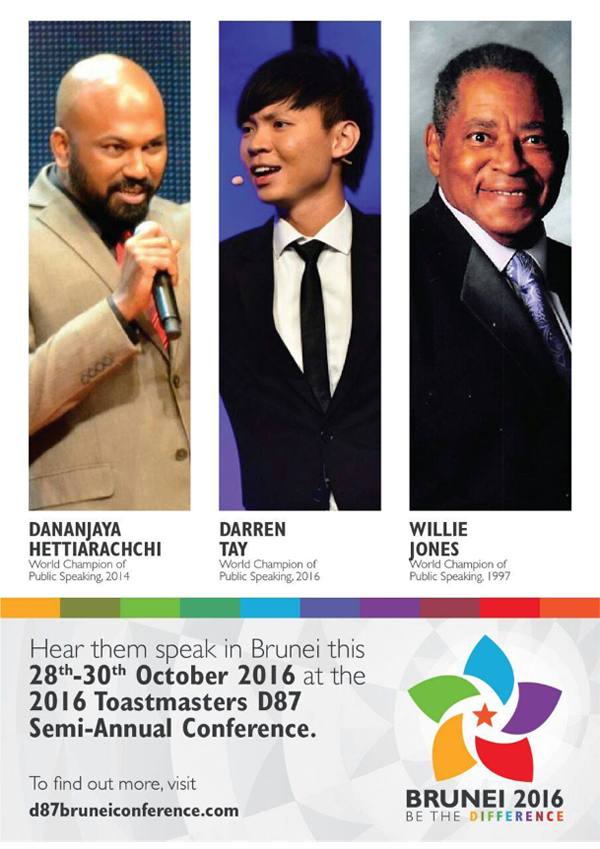 The event is jointly organized by local speakers’ clubs namely The Brunei Speakers’ Club, Brunei Advanced Speakers’ Club, Oil Town Talkers Toastmasters Club (OTTERS) and Universiti Brunei Darussalam Toastmasters Club. “The Brunei conference hopes to inspire youths to be confident communicator and leader as part of their daily lives so he or she can empower others. These are the reasons why I selected such speakers to be part of the biggest toastmasters event in Brunei.” shared by Organizing Chairman, Rano Iskandar (myself *lol*).

In line of Rano’s vision, the conference is open to members of the public. Tickets for full day educational session are available at BND120 and BND50 for contest. While tickets for tertiary/university students are priced at BND50 and BND35 for secondary students. To find out more, visit http://d87bruneiconference.com.

More than 150 members of Toastmasters International District 87, are scheduled to attend semi-annual conference to support their contestants. The event is supported by The Ministry of Home Affairs and The Ministry of Primary Resources and Tourism.