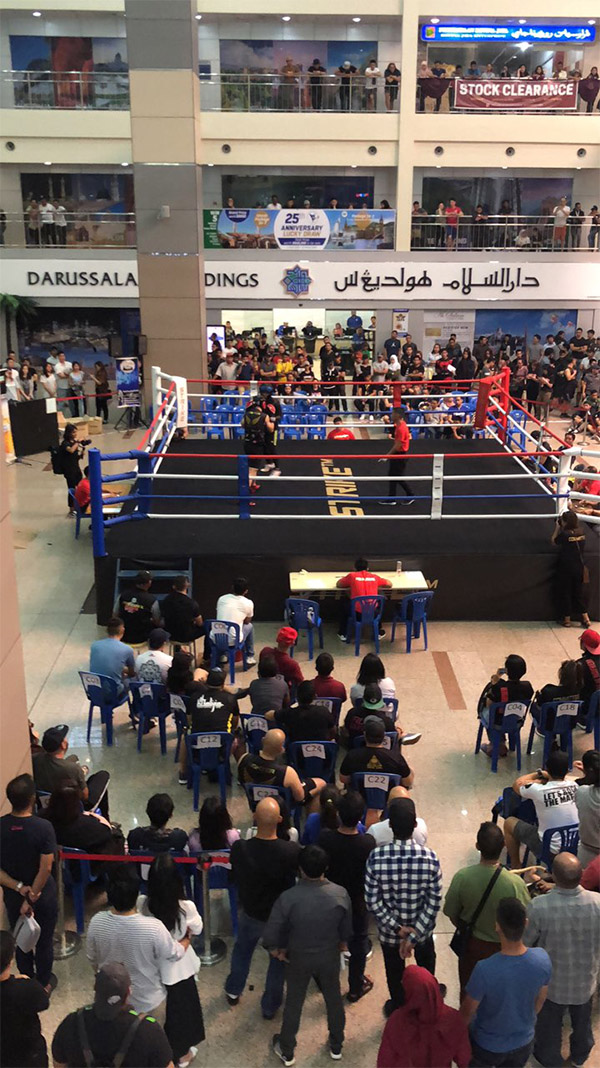 STATEMENT FROM STRIKE PROMOTIONS. As we and most people have probably seen videos that were showing an altercation during Strike Battle of Pride Event. An individual came into the airport mall and instigated and assaulted someone while the competition was still ongoing. A struggle ensued and the participants and gym owners intervened by trying to separate them, Nurhidayat and some of the Khalifa MMA members who appeared in one of the viralized video acted bravely to attempted to hold back the individual. The altercation ended swiftly and the event proceeded smoothly with the participants and crowd enjoying the rest of the evening with fun filled action pack bouts.

Unfortunately due to this incident we have been told to cancel Sunday day 2 events and the finals bouts. It is with great regret and disapointment that the hard work and efforts of all the participants who have been training for months and months, organising committee and crew members who have been planning and working towards this from early this year and the foreign participants who came all the way to Brunei to participate cannot do so. The altercation was very minor and ended swiftly but it was enough to go viral and it was blown out of proportion to the point we are not allowed to continue the event.

We would like to take this opportunity to thank every participating teams and players who took part in the tournament and the organizer have decided to refund all the main event ticket sold, please contact info@strike-promotions.com to claim your refund.

We are deeply affected by the outcome from last night’s incident as it has tarnished the beautiful effort and hard work of everyone from the management to the fans who came in droves yesterday to support the event. Again we sincerely apologised to everyone who got involved and who are affected by this.

Insha Allah our next step is to work with the relevant authority on providing the best safety and security measures for our future tournament and we will take last night’s incident as a learning lesson to grow this beautiful sport called combat Sports in this country.

On the positive side, the local athletes was able to compete in the pre-liminaries and gained some valuable experience. The event was a platform to identify athletes for future SEA Games and future events to help bring back pride from international games.

Latest info: The organizer Strike Promotions have lodged a police report and include the footage of the incident that have gone viral. The Royal Brunei Police Force (RBPF) confirmed the report and it has already taken statements from spectators (witnesses) and the victim of the altercation.

Strike Promotions also have taken legal action and cooperating with the RBPF for future investigation. It has confirmed that the RBPF have arrested the individual, named Herdy Wandy bin Yussof, who was involved in the altercation last Saturday.

The police warned that it is an offence under Section 159 (Affray) of the Penal Code Chapter 22 to cause public disturbance through unwarranted brawls.  If guilty, offender is liable to an imprisonment term of up to three years and a fine.