Warning: count(): Parameter must be an array or an object that implements Countable in /home/rano365/public_html/wp-content/themes/yoo_nano2_wp/warp/systems/wordpress/helpers/system.php on line 61
 Rano360.com » origins 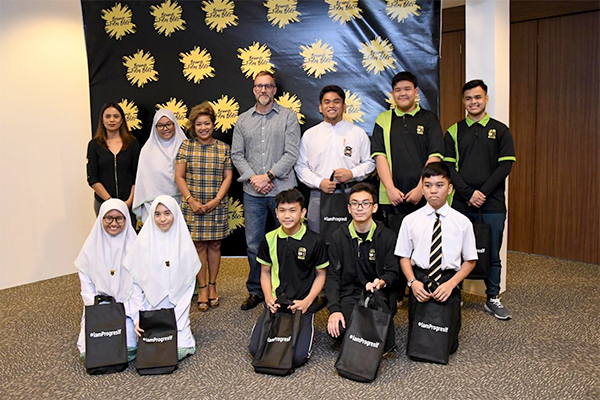 Progresif is paving the way for the development of future filmmakers and producers in its latest Corporate Social Responsibility (CSR) initiative for Brunei’s creative industry.

The company announced that they are sponsoring 15 students from six schools for their entry into the Brunei Film Blitz 2018 (BFB), giving them the opportunity to expand on their talents and passion for film.

This is also the second consecutive year that Progresif has supported the Brunei Film Blitz as part of ongoing efforts support and nurture the growth of Brunei’s creative industry.

Devin Edwards, Progresif’s Chief Marketing Officer, said: “Our investment into the local creative industry stems from our belief that Brunei’s creative talents can grow much further when they have a platform that supports them.”

“This is our second year of supporting the Film Blitz and we’re proud to be able to play a role in nurturing the abilities of young filmmakers, so they are inspired to pursue their passion and turn their talents into viable careers or businesses,” he said.

The BFB aims to push the abilities of local filmmakers to international standards through a series of workshops, screenings and a competition to produce a short film in 96 hours.

The winner of this competition will receive a full scholarship for a two-year Diploma in Screen and Media, also sponsored by Progresif. Winners will be announced on December 24 during the Gala Awards Night.

Registration for the BFB is open from November 9 until December 20, 2018. To register for the event, visit www.bruneifilmblitz.org 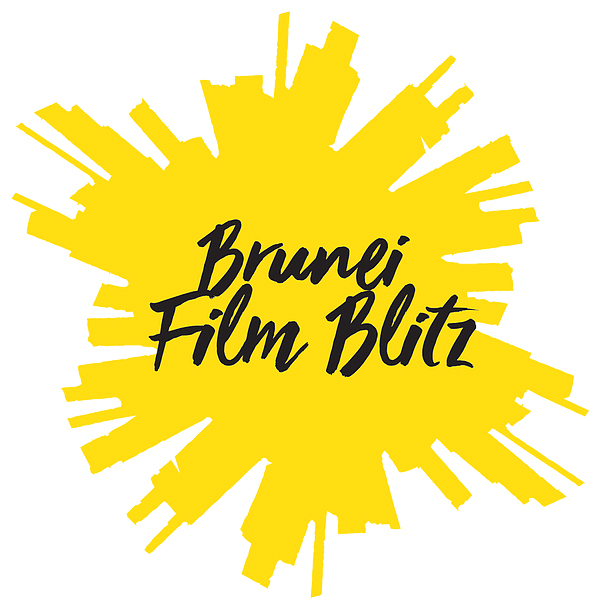 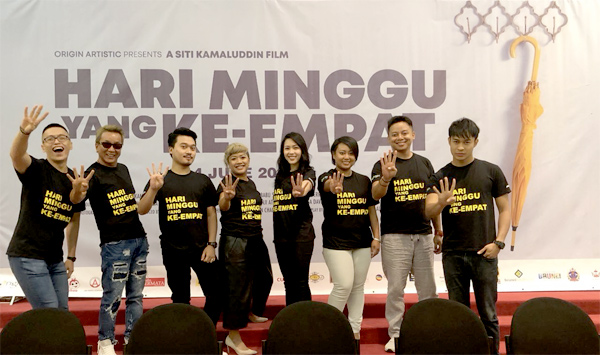 Following the success of its first film Yasmine, Origin Artistic is set to release its very first Bruneian Hari Raya flick in local cinemas nationwide on June 14, in time for the start of the Hari Raya Aidilfitri celebrations.

Directed and produced by award-winning director Siti Kamaluddin, the new film, ‘Hari Minggu Yang Ke-Empat’ (HMYK4), is a heart-warming drama-comedy about family forgiveness and second chances. It is the first Hari Raya movie to be produced by a local filmmaker.

News of the film release was announced yesterday at a press conference at the Ministry of Primary Resources and Tourism (MPRT). Among those in attendance were HMYK4 cast members and production crew, including director and producer Siti Kamaluddin.

HMYK4 is the culmination of experience gained from producing Yasmine, and sees many firsts.
According to Siti Kamaluddin, she said, “This new film is different from Yasmine, as in Yasmine a mix of standard Malay and Bruneian Malay was used, but HMYK4 is very Bruneian,” she said, adding that the idea of doing the movie came up while she was working on her new script just right after Chinese New Year.”

“I thought, why not make a movie on Hari Raya as there has never been one on it, and it will be a good topic of conversation during our Hari Raya visits.”

“I hope everyone will come and support the film and get it trending with the hashtag #liatsekampung come in groups to watch it as it is always fun to have a good laugh together,” said Siti.

“Unlike Yasmine, this film is also a very interesting model for me, as I worked with a Brunei-friendly budget and our cast is fully local. Hopefully we can draw a good response for the film and maybe progress to making a few movies a year.

“What I find as a director and writer – and I am also involved in the production side – is that I have to work extra hard. We multitask and we work with a much smaller team compared to Yasmine and this is a much scaled-down project.” 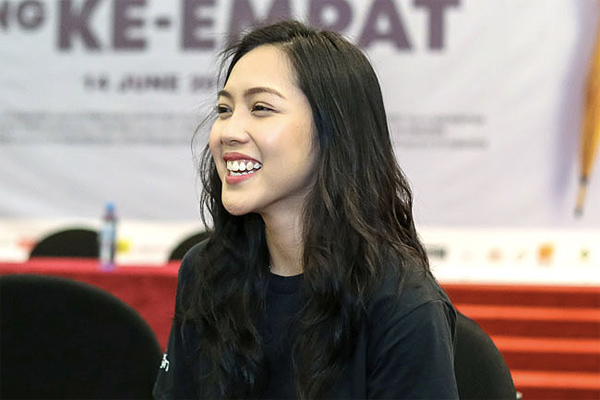 Liyana Yus is back once again. Image courtesy of Bahyiah Bakir of Borneo Bulletin. 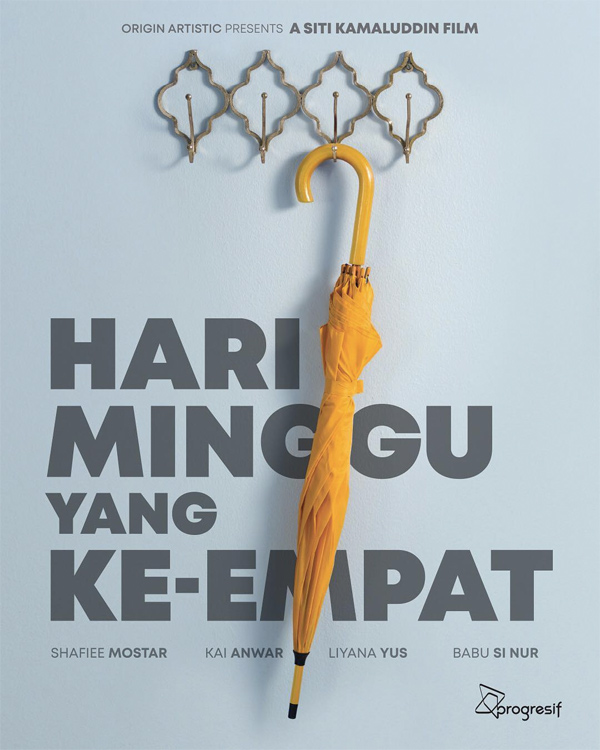 On the choice of the cast, Siti said the new actors were selected after viewing audition tapes. However, Kai Anuar’s (Babu Si Nur) talent was spotted by her during Brunei Film Blitz, which Origin Artistic participated in as part of the Brunei December Festival held in collaboration with Brunei Tourism.

“During Brunei Film Blitz, I got to watch a short film of one of the winners – Kai – in the open category. I got to see Kai as a different character from Babu Si Nur, and I was amazed to see how talented he was… I had him in mind (as part of the cast) for the script,” she said.

Talking about local films in general, Siti said making movies is not just simply shooting and screening them in the cinema, but the film profession requires a lot of career responsibilities and involves many interconnected disciplines and skills.

“It is a very technical job but is also very creative and corporations play a big role in supporting the local film. This (HMYK4) is not just a one off television show… 10 years from now you can still refer back and see the movie,” she said. “For me HMYK4 is very iconic as it our very first Hari Raya movie and it will probably be popular in other countries as well. We look forward to the screening.” 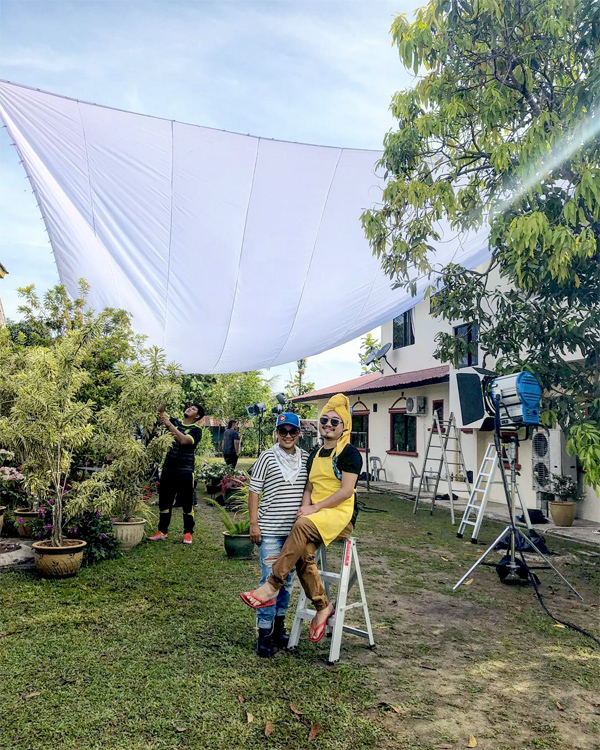 Siti Kamaluddin with Babu Si Nur on the set 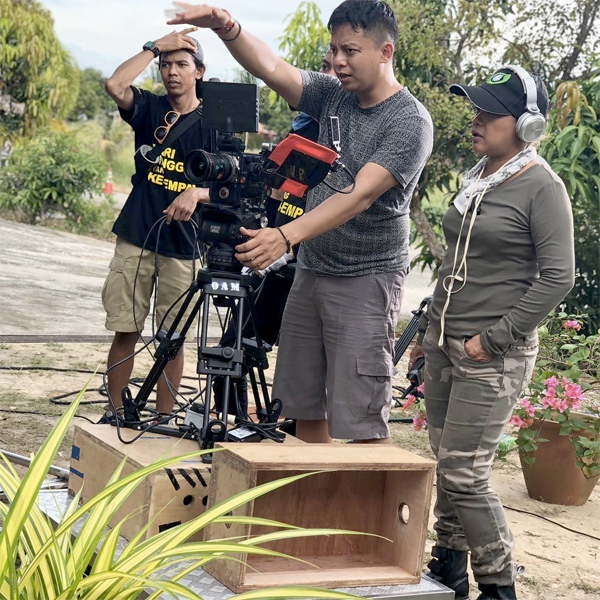 Dhimas Ananda, Director of Photographer on the set 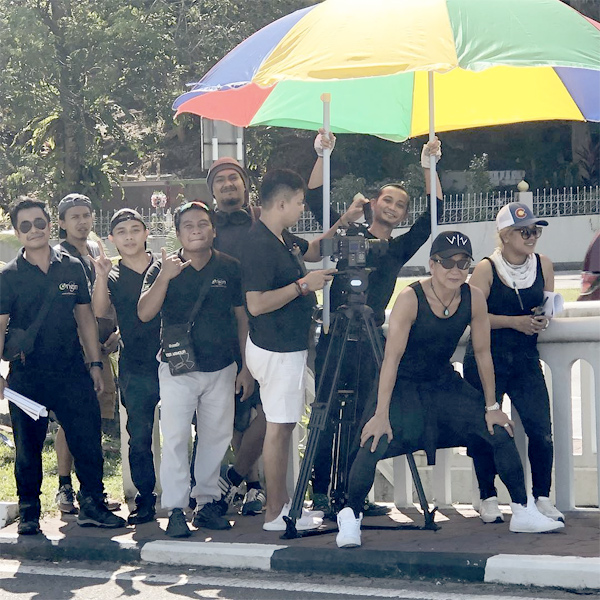 The production team in deep focus during the shoot

“I’ve learnt a lot in the filming process… from pre-production with rehearsals and script reading, right up to sessions with the director and the other cast. All this was done to build chemistry before the actual shooting, and to get a feel of the emotional states we should be and to familiarise ourselves all the filming dos and don’ts,” he said.

As for the star of Yasmine, Liyana Yus, the new film was a much less nerve-wracking experience and more of a chance to display the acting skills she has honed in the previous production.

“I just applied what I’ve learnt from Yasmine, and at the same time shared my experience with the new actors. For me perhaps the next challenge will be to progress from playing a teenager role as in Yasmine to a character aged in the 30s,” said the actress.

“I love making films for Brunei and wish to thank the Brunei audience for their continuing support. I hope to produce more films from Brunei to continue sharing our stories to the global audience,” she said. Source: Lyna Mohd of Borneo Bulletin.

You can follow updates of their production on social media @harimingguyangkeempat