Warning: count(): Parameter must be an array or an object that implements Countable in /home/rano365/public_html/wp-content/themes/yoo_nano2_wp/warp/systems/wordpress/helpers/system.php on line 61
 Rano360.com » sports

The Sonax Cup by Brunei Darussalam Golf Association (BDGA) was completed last Sunday. The tournament ran for three days from Friday 19/3/2021 and a total of 244 golfers participated in the competition in various categories namely: the open (gross and net), senior and ladies. The total cash prizes for this event was $4450 and the list of winners is as attached, including the champion in the gross open category which went to Suhaimi Ibrahim who shot 71 gross, one under par. Suhaimi Ibrahim also received the Sonax Challenge Trophy presented by Mr. Mike Chua, the Managing Director of Sonax Brunei Sdn. Bhd. The tournament took place at Mentiri Golf Club.

This was the first BDGA golf tournament at the national level for the year 2021, with next one planned for 28 to 30 of May at the RBGCC. This tournament was a great success with participation of more than 200 golfers. BDGA thanked Sonax Brunei Sdn. Bhd., the tournament main sponsor, and expressed the hope that its partnership with Sonax Brunei Sdn. Bhd. would continue to grow.

BDGA also gave $1000 donation to “Tabung Anak Anak Yatim” (Orphans Fund) and the representative from the Ministry of Culture, Youth and Sports, Ms. Nurul Nazurah bte Jaya, was present to receive the sponsorship.

Since the new BDGA Governing Council was elected back since 5th January this year, it received feedbacks from golfers in Brunei that the most sought after deliverable is golf tournaments. Hence, BDGA decided to organize the first tournament (Sonax Cup) and a few more planned for this year. This will help to provide a competitive platform at the national level for golfers to showcase their skills. In the process, it was hoped that scout for new golfing talents could be spotted and to be further developed to represent the country in the near future. Images courtesy of Pg Azam Omar and Shahiruddin. 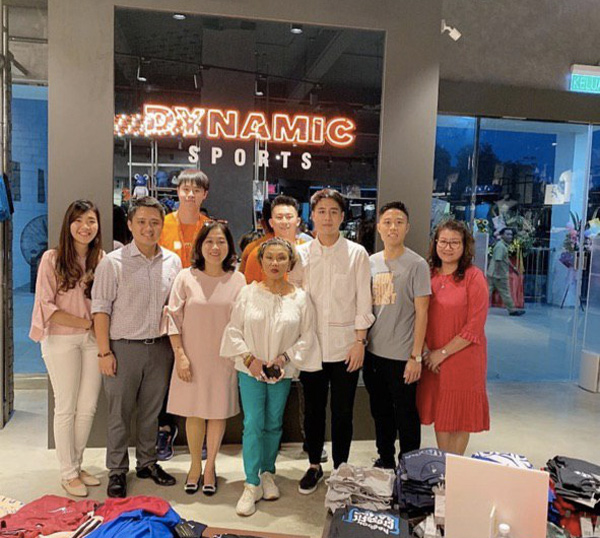 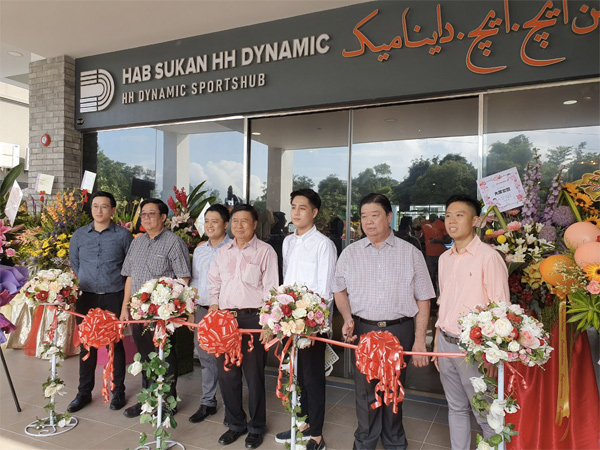 Dynamic Sports recently drew waves of crowd after its launch of the flagship store two Sundays ago at The Walk (Beribi). It attracted different walks of life especially those in the sports community. Strategically located in Beribi, Dynamic Sports heralded a new era in providing a one stop sports shop furnished with reputable brands with the likes of Adidas, Nike, Reebok, Saucony, ASICS, Crocs and many more.

The company aims to create a platform that provides the most suitable products for the running/sports community of all ages and let’s not forget that they also provide professional advice and guidance, training and rehabilitation to anyone, be it casual or for running.

All present during the launch were number of national scheme runners, sports enthusiasts (like myself) and the members of the press. The ribbon cutting was officiated by Mr. Law Haw Wei, Mr. Lau How Teck and Mr. Lau How Kun accompanied by their sons.

Dynamic Sports has already garnered traction from online shoppers and they can already purchase the items online prior to the launch. This is made possible by www.dynamicsports.co where you will get a very comprehensive list of products to choose from.

Lau Soon Tiong, one of the shareholders of Dynamic Sports, said that the company’s vision is to assist local athletes and passionate sports enthusiasts to strive for greatness by providing a conducive environment for them to improve and grow.

Dynamic Sports will introduce its second phase where they will provide gym services and classes that will assist the community in rehabilitation and condition of the body.

Last weekend, Dynamic Sports had a special deal for selected shoes and it was well received as shoppers flocked in to grab the good deals.

You can follow them on instagram @dynamicsports.bn and if you are wondering of the location, it’s the white building with hints of red and it’s located right before Starbucks Beribi.

Chang Ein Hong came to support the launch as well 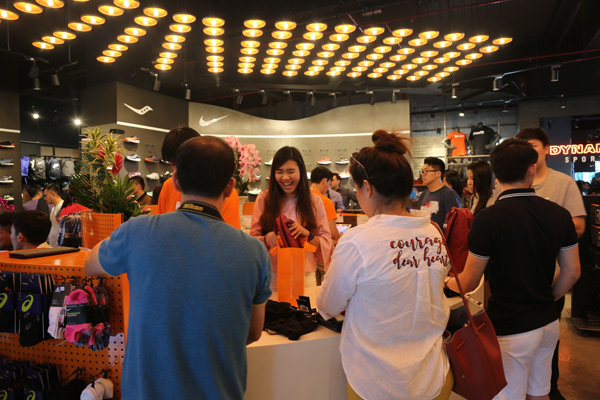 Orange is the new black 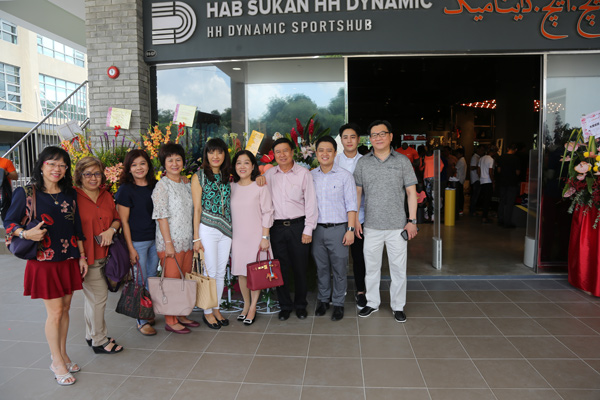 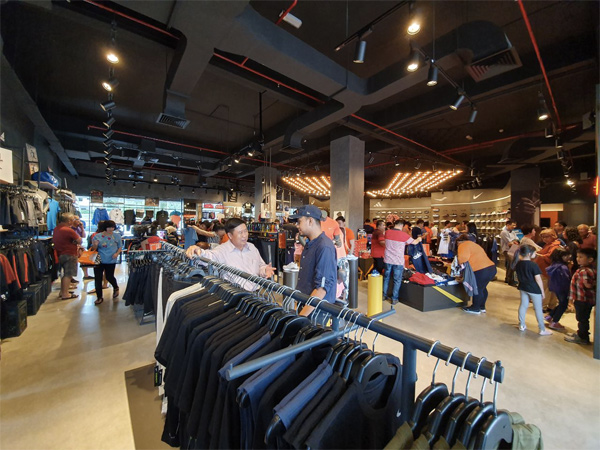 Plenty of varieties at Dynamic Sports 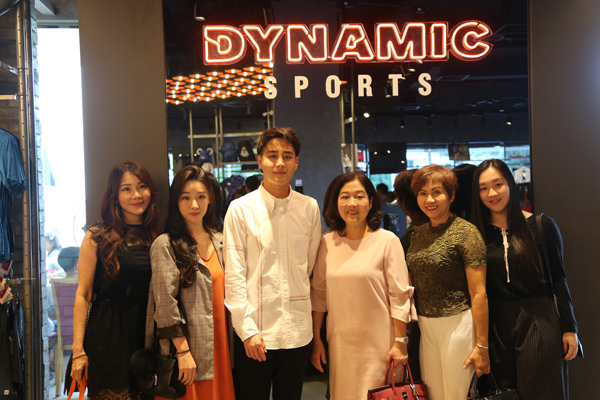 Soon Ai, one of the shareholders of Dynamic Sports 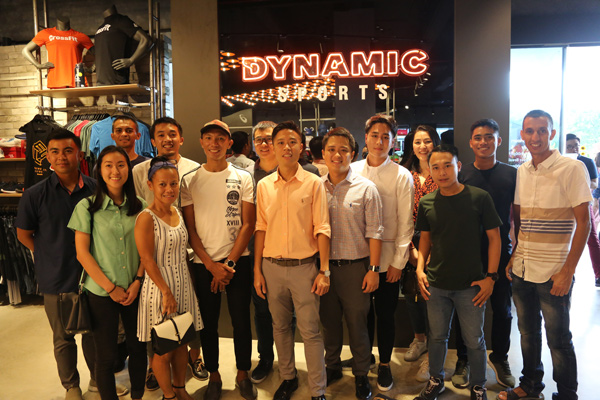 With the athletes during the opening 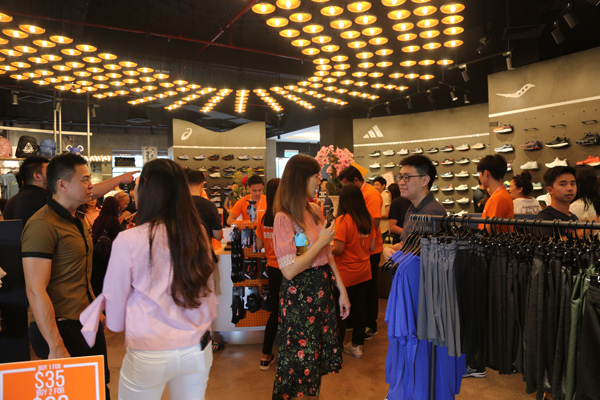 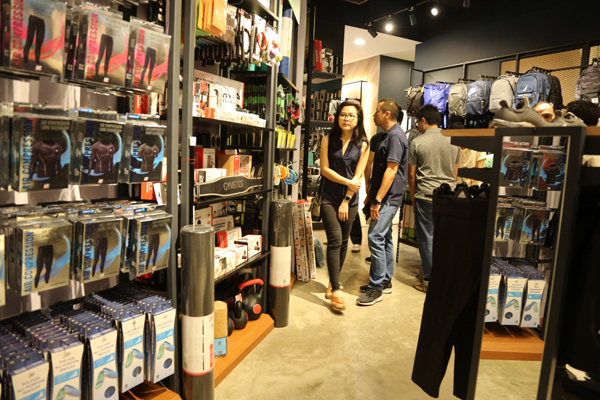 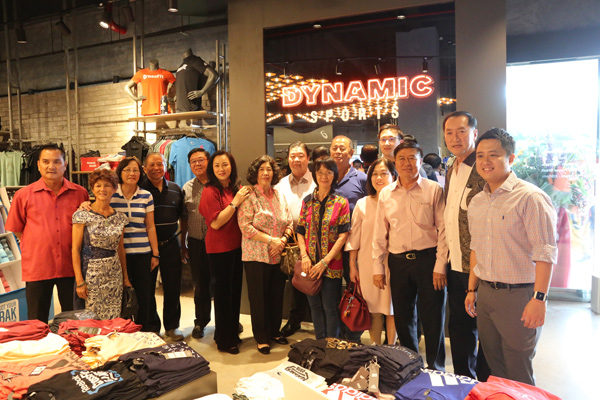 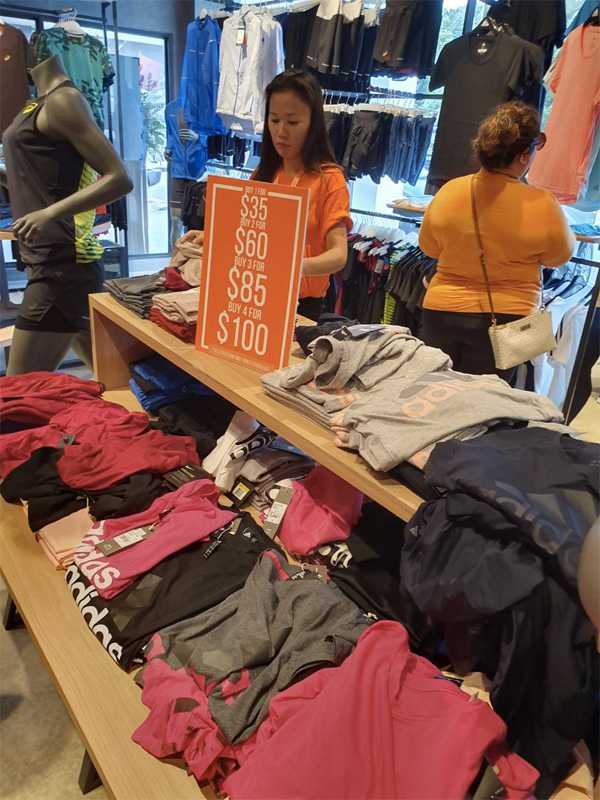 Special corner deals which was quite popular among shoppers 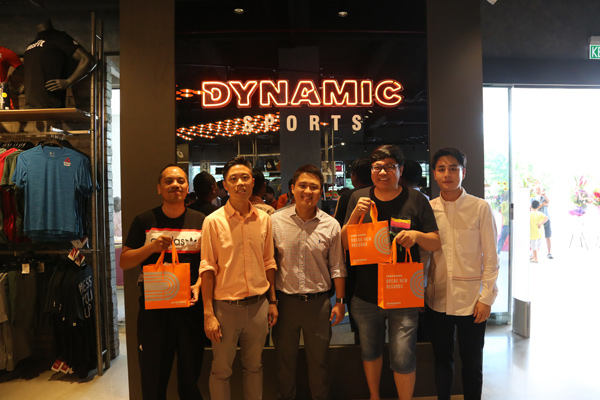 We did some shopping too 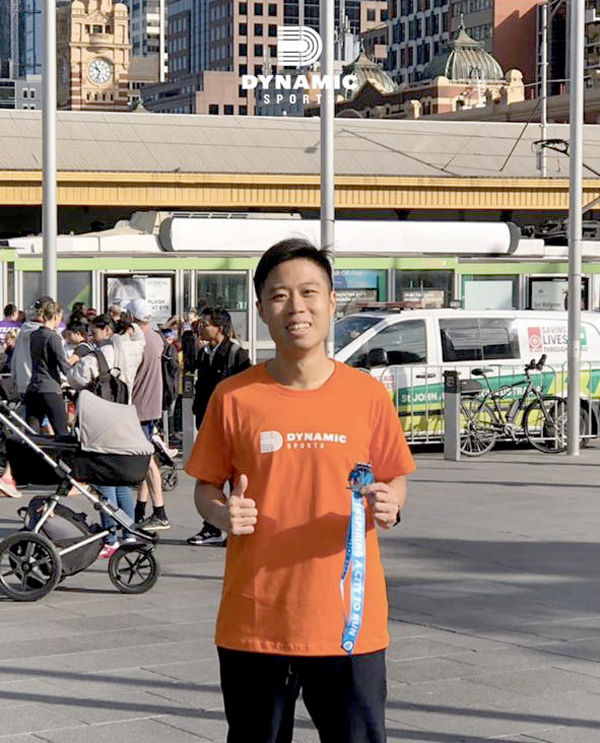 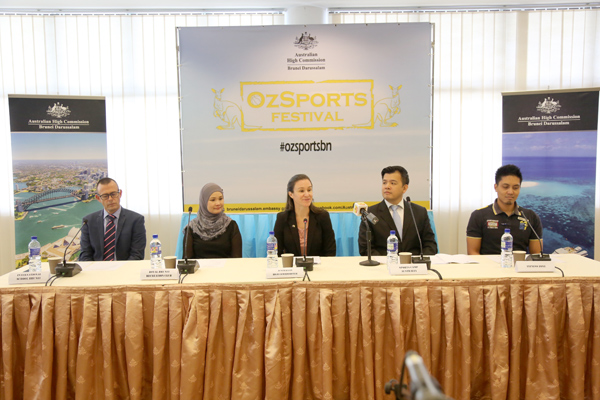 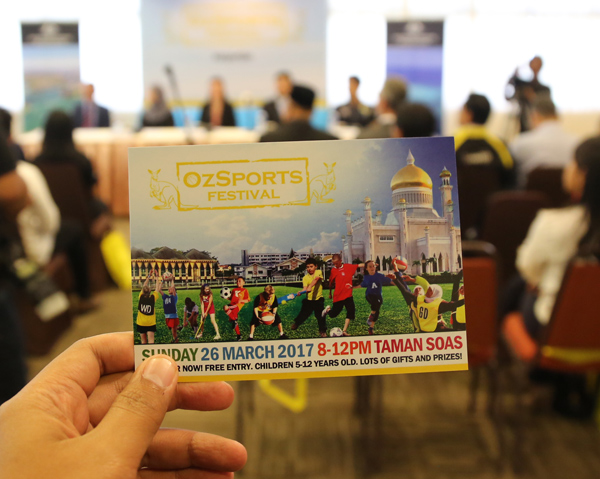 This is something of interest especially to parents as they can bring their children to see what kind of sports or activities they might be interested in. Sometimes we need to go to grass root levels to see what they would enjoy. CHILDREN aged five to 12 are invited to join a fun-filled sports activities day on March 26 from 8-12 noon at Taman Haji Sir Muda Omar ‘Ali Saifuddien in the OzSports Festival event, organised by the Australian High Commission in Brunei Darussalam. This is also made possible with the collaboration of Sports Camp Australia and other participating vendors.

This event will be held at Bandar Ceria on Sunday, 26th March from 8am to 12pm and this is also the first of its kind Australia themed sports.

This was announced during the press conference hosted by the Australian High Commission and chaired by the High Commissioner, Nicola Rosenblum earlier this week. The event will be called The OzSports Festival.

It was good to see my friend, Ken Han, who was appointed as Brunei Country Manager of Sports Camp Australia. Also present were representatives from the Ministry of Primary Resources and Tourism, ISB, Royal Brunei Recreation Club and Fitness Zone.

As Her Excellency Nicola mentioned during the press conference, “Sport is an integral part of Australian culture. Whether it’s a game of backyard cricket with family, cheering a local team or striving for victory at the elite level – sport is a part of every Australia’s life. This is why the Australian High Commission is pleased to be working with Sports Camps Australia (SCA) to organise the OzSports Festival.”

There will be 10 different sports at Taman SOAS ranging from football to netball to frisbee to bike riding and many more. For parents’ knowledge, the event OzSports Festival will be free of charge. There will be participating vendors such as Hybrid Movement (cross fit), Shooting Stars (Basketball), Brunei Dodgeball Association and many more.

I hope this event will be a success and I’m happy that such event is taking place. This will be a good spring board for the young ones. Ken Han is a good addition to this event as he is quite passionate in creating camps for younger kids under the flagship of Shooting Stars. Being involved in Sports Camp Australia in Brunei, there will be different levels ranging from development camps to competitive ones. Good luck on that, bro.

Hope to see you at the OzSports Festival next weekend 😀 And to Nicola, it was nice to have finally met you even though it was pretty brief. 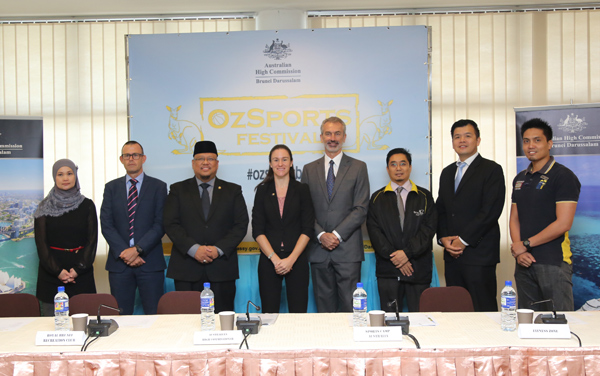 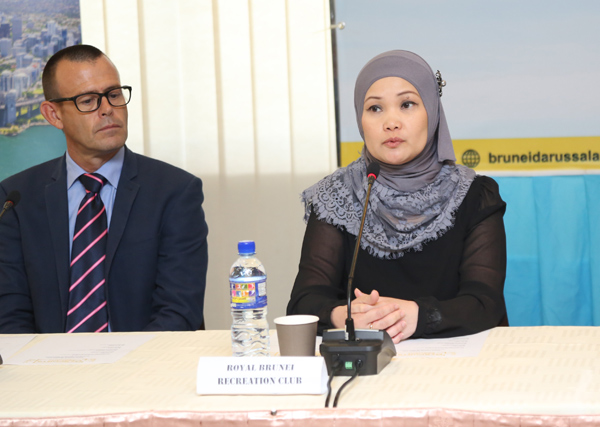 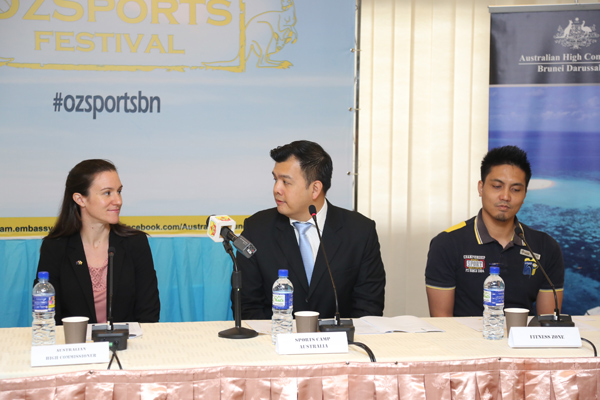 Ken Han, who is the founder of Shooting Stars, is also Brunei Country Manager for Sports Camp Australia (centre) 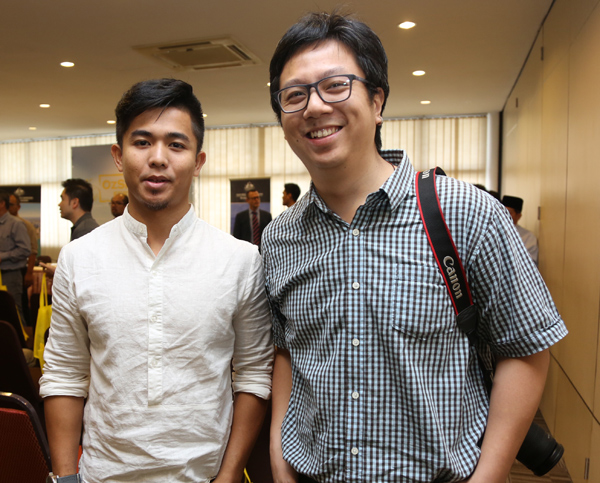 Ak Fauzi and Chun Leong, former The Brunei Times’ sports reporters, are now running brusports.com and it’s good to see them venturing into this business 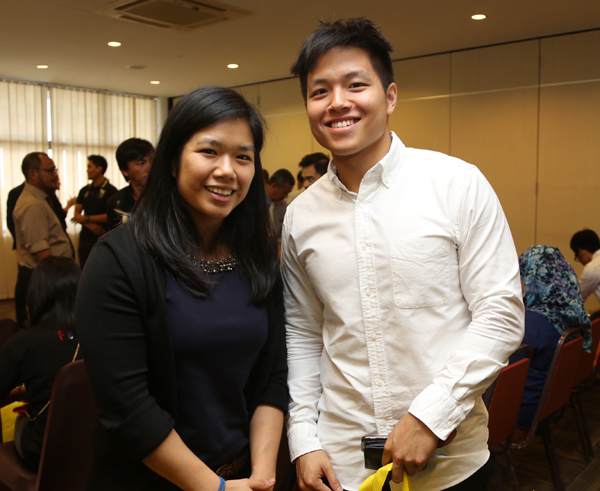 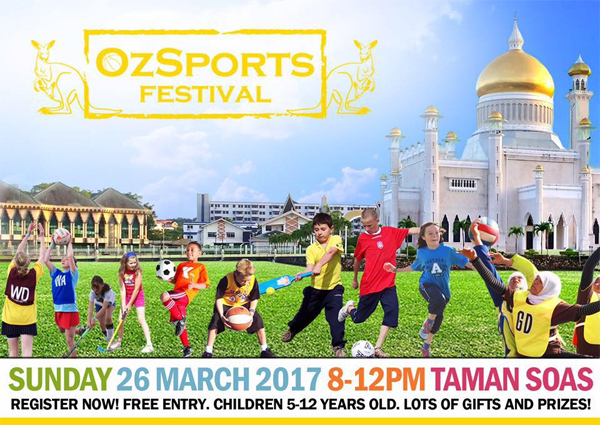 See you on the 26th March